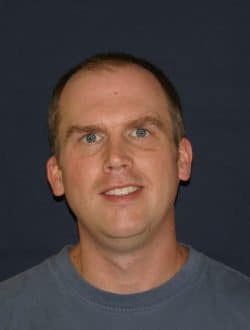 T. Mitch Wallis received his B.S. degree in physics from the Georgia Institute of Technology in 1996 and his M.S. and Ph. D. degrees in physics from Cornell University in 2000 and 2003, respectively. His PhD work focused on the manipulation and characterization of individual atoms and molecules with a scanning tunneling microscope. In 2003, he was awarded a National Research Council postdoctoral fellowship at the National Institute of Standards and Technology (NIST) in Boulder, Colorado. From 2005 to 2007, he held a postdoctoral appointment at Colorado State University. His postdoctoral research focused on the development of metrology for magnetic field imaging based on bi-material cantilevers as well as cantilever-based measurement of magnetomechanical phenomena such as the Einstein-de Haas effect. Since 2007, he has held a position as a physicist at NIST. His current research interests include the development of high-frequency scanning probe microscopes, broadband electrical measurements, and other metrology to enable advances in RF nano-electronics, “beyond-CMOS” devices, and photovoltaics. He is a member of IEEE MTT-S, former chair of the MTT Technical Committee on Radio Frequency Nanotechnology (TC8), as well as a former executive committee member of the Automatic RF Techniques Group (ARFTG) (2009-2015). He  is the co-author of a book on Measurement Techniques for Radio Frequency Nanoelectronics (Cambridge, 2017).