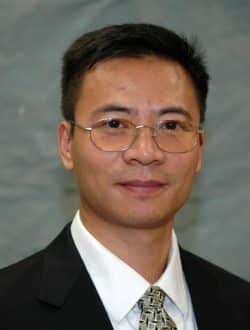 Mingyu Lu received the B.S. and M.S. degrees in electrical engineering from Tsinghua University, Beijing, China, in 1995 and 1997 respectively, and the Ph.D. degree in electrical engineering from the University of Illinois at Urbana-Champaign in 2002. From 2002 to 2005, he was a postdoctoral research associate at the Electromagnetics Laboratory, University of Illinois at Urbana-Champaign. He was an assistant professor with the Department of Electrical Engineering, University of Texas at Arlington from 2005 to 2012. He joined the Department of Electrical and Computer Engineering, West Virginia University Institute of Technology in 2012 and he is currently a professor. His research interest includes wireless power transmission, Internet of Things, radar systems, antenna design, and computational electromagnetics. He was the recipient of the first prize award in the student paper competition of the IEEE International Antennas and Propagation Symposium, Boston, MA in 2001. He served as the chair of Antennas and Propagation Society of IEEE Fort Worth Chapter from 2006 to 2011.