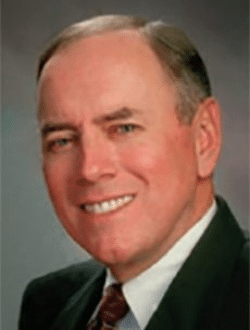 Mike Harris received his Bachelor’s degree in Electrical Engineering from the Georgia Institute of Technology in 1974. While completing the requirements for his undergraduate degree, he worked as a student assistant in the Physical Sciences Division
of the Georgia Tech Engineering Experiment Station where Walter Cox was the Division Chief. Upon receiving his degree, he
worked for Harris Semiconductor in the reliability department. He was responsible for reliability assurance and failure analysis for CMOS digital
circuits and later bipolar read only memories.
In 1976, he was re-united with Walter Cox and Charlie Rucker’s group and began his career in microwave engineering. His initial work was related to
chip-level combining of IMPATT diodes where the team established record output power levels for solid state oscillators at X-band.
He received his Master’s degree in Electrical Engineering in 1980 and began developing fabrication processes for GaAs MESFETs. He continued research on
FET devices including PHEMTs and GaN on silicon carbide.
Mike Harris is currently the Associate Director of the Electro-Optical Systems Laboratory of the Georgia Tech Research Institute. He is still active in applied
research focused on thermal management of solid state power amplifi er assemblies.
He served on the Microwave Theory and Techniques Society AdCom as chairman of the Technical Coordinating Committee, Treasurer and chairman of the
Operations Committee.