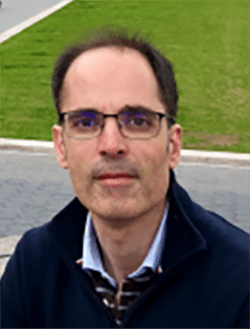 Dr Miguel A. G. Laso received his MSc and PhD degrees in Telecommunications Engineering from the Public University of Navarre (UPNA), Navarre, Spain, in 1997 and 2002, respectively. From 1998 to 2001, he was with the Electrical and Electronic Engineering Department, UPNA, as a doctoral fellow student. He was an Assistant Professor in the same institution from 2001 to 2006, where he then became an Associate Professor (Profesor Titular).  From 2002 to 2003, he was also a post-doctoral Research Fellow with the Payload Systems Division of the European Space Research and Technology Centre, European Space Agency (ESTEC/ESA), Noordwijk, The Netherlands.

Dr Laso is a member of the MTT-5 filters committee as well as several international professional and scientific associations. He is also a member of the technical program review committees of several conferences, including the IEEE MTT-S International Microwave Symposium (IMS). He served as the European Microwave Conference 2018 co-chair. Currently, he is Associate Editor of the IEEE MTT-S Transactions on Microwave Theory and Techniques.

He has published dozens of papers in the RF/microwave filter and satellite communication domains and contributed to major conferences as well as acted as Principal Investigator in projects with public and private funding from major telecom European companies in the space sector (TESAT, Thales, etc.) as well as the European Space Agency. Dr. Laso is also a holder of several international patents successfully transferred to the European industry.

His current research interests comprise periodic structures, Inverse Scattering problems, synthesis techniques for filters and passive components in the microwave, millimeter-wave, and THz frequency range, and their applications in satellite/wireless communications, as well as new fabrication methods such as the Additive Manufacturing for the space/wireless industry.

He has been the recipient of several prizes including the Spanish National Prize to the Best Doctoral Dissertation in Telecommunications (2002) awarded by the Spanish Association of Telecommunication Engineers (COIT/AEIT) and the Junior Research Award of UPNA (2003). He has been also the recipient of the 2005 Spanish National Prize for the Best Project in Innovation in Higher Education awarded by the Spanish Ministry of Education and Science.

He is currently the Head of the Microwave Components Group (MCG) at the Electrical, Electronic and Communications Department of the Public University of Navarre. Follow Dr Laso’s as well as MCG-UPNA’s activities at LinkedIn and Google Scholar.