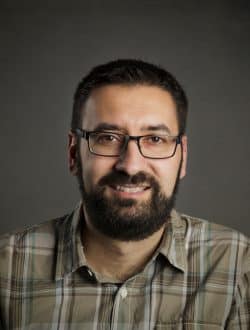 Miguel Angel Sanchez-Soriano (S’09-M’13-SM’19) was born in Yecla (Murcia), Spain, in 1984. He received the Telecommunications Engineering degree (with a Special Award) and the Ph.D degree on Electrical Engineering from the Miguel Hernandez University (UMH), Spain, in 2007 and 2012, respectively.

In 2007, he joined the Radiofrequency Systems Group, UMH, as a research assistant. In 2010, he was a visiting researcher with the Microwaves Group at Heriot-Watt University, Edinburgh, UK. In January 2013 he joined the LabSTICC group (Université de Bretagne Occidentale, Brest, France) as a Postdoctoral Researcher, where he worked for 2 years. From January 2015 to September 2015, he was a “Juan de la Cierva” research fellow at the Grupo de Aplicaciones de Microondas (GAM) (Technical University of Valencia, Spain). Since September 2015, Dr. Sanchez-Soriano has been with the University of Alicante, where he is currently an Associate Professor. His research interests cover the analysis and design of microwave planar devices, especially filters and their reconfigurability, and the multiphysics study of high frequency devices.

Dr. Sanchez-Soriano was the recipient of the runner-up HISPASAT award to the Best Spanish Doctoral Thesis in New Applications for Satellite Communications, awarded by the Spanish Telecommunication Engineers Association (COIT/AEIT), and of the Extraordinary Ph.D award from the Miguel Hernández University. He has authored or co-authored more than 60 publications in journals and international conferences. He serves as an Associate Editor for the journals IEEE Transactions on Microwaves, Theory and Techniques and IET Microwaves, Antennas and Propagation, and as a regular reviewer for more than twenty journals, including the IEEE Microwave and Wireless Components Letters, IET Electronics Letters and IEEE Access, and several IEEE international conferences.