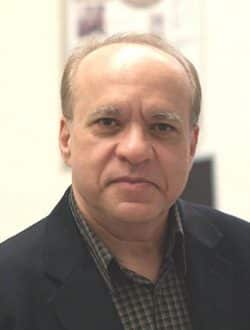 Michel S. Nakhla (S’73–M’75–SM’88–F’98–LF’12) received the Ph.D. degree in electrical engineering from University of Waterloo, ON, Canada, in 1975. He is currently a Chancellor’s Professor of Electrical Engineering with Carleton University, Ottawa, Canada. From 1976 to 1988, he was with Bell-Northern Research, Ottawa, as the Senior Manager of the Computer-Aided Engineering Group. In 1988, he joined Carleton University, as a professor and holder of the Computer-Aided Engineering Senior Industrial Chair established by Bell-Northern Research and the Natural Sciences and Engineering Research Council of Canada. He is the Founder of the High-Speed CAD Research Group at Carleton University. He has authored or coauthored more than 350 peer-reviewed papers in journals and conferences, two books, six multimedia books on signal integrity, and seven chapters in different books. He is the co-recipient of the IEEE 2002 Microwave prize. He received the 2017 IEEE Canada A.G.L. McNaughton Gold Medal for “outstanding contributions to signal integrity of high-speed systems and interconnects”. He was inducted as a fellow of the Canadian Academy of Engineering in 2016 for “trend-setting achievements and contributions to the state of the art in computer-aided design of high-speed VLSI and Microwave circuits and systems”.

The increasing demand for higher data rates, lower power and multifunction products are necessitating newer generations of complex and denser electronic circuits and microwave systems. With the rapid increase in signal speeds and decreasing feature sizes, high-frequency effects become the dominant factors limiting the overall system performance. To provide sufﬁcient accuracy, these effects must be captured by appropriate models and included during the design process. For example, in many instances, electromagnetic 3-D methods have become increasingly indispensable analysis and design tools for a variety of complex high-speed systems. On the other hand, it is often unfeasible to perform simulation or optimization using the associated full complex models.

Model-order reduction (MOR) has proven to be an effective tool in reducing the computational cost associated with large complex systems and enabling design tasks that are not possible otherwise. It is based on developing systematic algorithms for replacing complex models with much simpler ones that still accurately capture the essential features of the original large system. This is achieved by projecting the equations describing the large system into a lower dimensional subspace. Simulation is performed by replacing the original large system, with its reduced-order macromodel. Appropriate mathematical mapping is developed to extract the information associated with the large system from the simulation of the reduced macromodels. This results in significant computational advantages, as the size of the reduced macromodel is much smaller than the original system. The use of MOR techniques has proven also to be beneficial in other design tasks such as optimization, design space exploration, uncertainty quantification and design centering.  Currently, model-order reduction is successfully used in a wide spectrum of scientific applications including among others: neuroscience, modelling of cardiovascular systems, vibrations analysis, weather prediction, computational finance, fluid dynamics and aerodynamics.

In this talk, recent advances and challenges in modeling and simulation of large-scale systems using model-reduction based algorithms will be presented with emphasis on VLSI and Microwave applications.