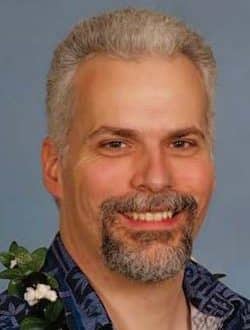 Michael P. DeLisio was born in Southfield, Michigan, in 1968. He received the B.S.E. degree in electrical engineering from the University of Michigan at Ann Arbor in 1990 and the M.S. and Ph.D. degrees in electrical engineering from the California Institute of Technology in Pasadena in 1991 and 1996, respectively. From 1996–2001, he held a faculty position in electrical engineering at the University of Hawaii at Manoa, earning tenure and promotion to associate professor in 2000. In 2001, he was a visiting associate at Caltech, and he cofounded Wavestream Corp. in San Dimas, California, the first company to successfully commercialize microwave and mm-wave products using spatial power combining; Dr. DeLisio is chief technical officer.

As a researcher, an educator, and an entrepreneur, Dr. DeLisio has developed techniques for spatial power combining, which is an approach to producing very high- output-power solid-state devices by combining the outputs of many individual devices in free space, thereby eliminating the losses in more traditional waveguide or microstrip techniques. Using this innovative technique, active devices combining the outputs of hundreds of individual elements can be made, allowing the creation of solid state microwave and mm-wave amplifiers with unrivaled form factors, efficiencies, and output powers.

Dr. DeLisio is a member of Tau Beta Pi and Eta Kappa Nu. He is active in the IEEE MTT-S, serving as the secretary of the 1999 MTT-S AdCom and as an elected MTT-S AdCom member for two terms. He has served on the technical and steering committees of several IEEE conferences.