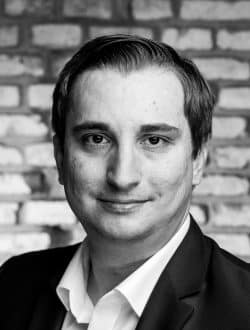 Michael Haider received his B.Sc. and M.Sc. degrees in electrical and computer engineering from Technical University of Munich (TUM), Germany, in 2014 and 2016, respectively. In 2019 he received his Dr.-Ing. (Ph.D.) degree in electrical and computer engineering with highest distinctions (summa cum laude), also from TUM. From 2016 to 2019, he has been a Research Associate with the Institute of Nanoelectronics at TUM, where his research focused around the areas of quantum circuit theory, wireless power transfer, and stochastic electromagnetic fields. Michael Haider received the 2020 VDE ITG Dissertationspreis for his outstanding Ph.D. thesis on Investigations of Stochastic Electromagnetic Fields. In 2019, he joined the Computational Photonics Group at TUM as a postdoctoral researcher. His current research interests are the modeling of charge carrier transports within quantum cascade lasers, dynamical modeling of quantum devices within a generalized Maxwell-Bloch framework, and quantum circuit theoretic models applied to Josephson travelling-wave parametric amplifiers. Michael Haider has co-authored more than 50 scientific papers in refereed journals and conference proceedings.