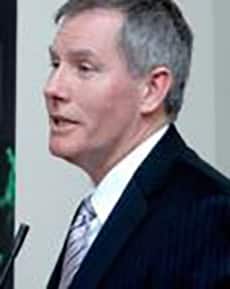 Michael Steer is the Lampe Distinguished Professor of Electrical and Computer Engineering at North Carolina State University. He received his B.E. (Bachelor of Engineering) and Ph.D. degrees in Electrical Engineering from the University of Queensland, Brisbane, Australia, in 1976 and 1983 respectively.

He joined NC State University in 1983 and in 1999 and 2000 he was Professor and Director of the Institute of Microwaves and Photonics at the University of Leeds where he held the Chair in Microwave and Millimeterwave Electronics. He has authored more than 450 publications on topics related to microwave and millimeter-wave systems; nonlinear RF effects; circuitelectromagnetic-acoustic interactions, RF behavioral modeling; RF circuit simulation; high-speed digital design; and RF/microwave design methodology.

He has authored three books including the textbook Microwave and RF Design: A Systems Approach, 2010. He is a Fellow of the Institute of Electrical and Electronic Engineers. He was Secretary of IEEE/ MTT-S in 1997, a member of AdCom from 1998 to 2001, and from 2003 to 2006. ), and Associate Editor of the IEEE Microwave Magazine from 1999 to2000. He is a former Editor-In-Chief of the IEEE Transactions on Microwave Theory and Techniques. He received the Alcoa Foundation Distinguished Research Award from North Carolina State University in 2003; he was the Jack S. Kilby Lecturer in 2003; and in 1994 and 1996 received the Bronze Medallion from U.S. Army Research for Outstanding Scientific Accomplishment. In 2009 he received a military medal awarded to a private citizen, the “Commander’s Award For Public Service” from the Commanding General of the U.S. Army Research, Development and Engineering Command for his work directed at countering improvised explosive devices. He shared the 2010 Microwave Prize for the paper “Electro-Thermal Theory of Intermodulation Distortion in Lossy Microwave Components,” IEEE Transactions on Microwave Theory and Techniques, Vol. 56, No. 12, December 2008. The work showed that the underlying limit to the performance of communication and radar systems is signal distortion resulting from electro-thermal effects. The performance of communication systems, as well as of high power radar systems, can be improved through appropriate measures to remove heat, and by the choice of materials with particular thermal characteristics. He was greatly inspired by Fred Rosenbaum when he, with his wife Carol, visited the University of Queensland in 1981 and shared his philosophy of being an educator; that teaching was a high calling, and tireless service was essential to having a fulfilled life.

Simulation and Modeling of Electrically Large Microwave and Millimeter-Wave Systems

Many of the grand challenges in the engineering of microwave and millimeter-wave circuits concerns the complexity of large systems with interacting electromagnetic fields, circuits and thermal effects. This is particularly true with power generation systems where thermal effects significantly affect stability and ultimately power handling capability.