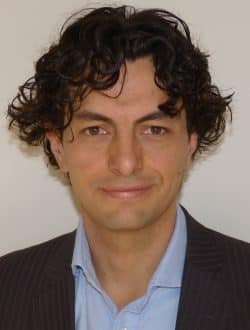 Mauro Ettorre (M’08–SM’15) received a Laurea degree “summa cum laude” in Electrical Engineering, and a Ph.D. degree in Electromagnetics from the University of Siena, Italy, in 2004 and 2008, respectively. Part of his Ph.D. work was developed at the Netherlands Organisation for Applied Scientific Research (TNO), The Hague, the Netherlands, where he later worked as an Antenna Researcher. From 2008 to 2010, Dr. Ettorre was a Postdoctoral Fellow at Institut d’Electronique et de Télécommunications de Rennes (IETR), University of Rennes 1, France. In 2010 and 2016, he was a Visiting Scholar in the Radiation Laboratory, Department of Electrical Engineering and Computer Science, University of Michigan, USA. Since October 2010, he is a Research Scientist at the Centre National de la Recherche Scientifique (CNRS), within the IETR. In 2014, he assumed responsibilities for the multi-beam antenna activity for satellite applications in the joint laboratory between IETR and Thales Alenia Space, France. Since 2017, he is an Associate Editor for the IEEE Transaction on Antennas and Propagation. In 2017, 2018, and 2019 he was a member of the best paper award selection committee for the IEEE Transactions on Terahertz Science and Technology. In 2020, he co-founded the open access journal Reviews on Electromagnetics of European Association on Antennas and Propagation (EurAAP) for which he serves as Associate Editor In 2020 and 2021 he was appointed EurAAP ambassador. In 2020 and 2021 he was appointed European Association on Antennas and Propagation (EurAAP) ambassador.
Dr. Ettorre’s research interests include the analysis and design of leaky-wave antennas, periodic structures, millimeter-wave antennas, non-diffractive radiation and localized waves, near-field focusing techniques, and wireless power transfer systems.
Dr. Ettorre received the Young Antenna Engineer Prize at the 2008 ESA Antenna Workshop in the Netherlands, the Innovation Award at 2018 ESA Antenna Workshop in the Netherlands, the Best Paper Award in Electromagnetics and Antenna Theory at the 2018 ‎European Conference on Antennas and Propagation (EuCAP), London, UK and the Best Antennas Paper Award at EuCAP 2021, Düsseldorf, Germany.‎