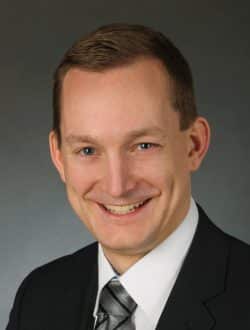 Markus Gardill is a professor and head of the Chair of Electronic Systems and Sensors and the Brandenburg University of Technology Cottbus–Senftenberg, Germany.

He received the Dipl.-Ing. and Dr.-Ing. degree in systems of information and multimedia technology/electrical engineering from the Friedrich-Alexander-University Erlangen-Nürnberg, Germany, in 2010 and 2015, respectively, where he was a research assistant, teaching fellow, and later head of the team for radio communication technology.

Between 2015 and 2020 he was R&D engineer and research cluster owner for optical and imaging metrology systems at Robert Bosch GmbH and later joined InnoSenT GmbH. Here he was head of the group radar signal processing & tracking, developing together with his team new generations of automotive radar sensors for advanced driver assistance systems and autonomous driving. From 2020 to 2021 he was associate professor for satellite communication systems at the Julius Maximilian University of Würzburg.

Markus Gardill is a member of the IEEE Microwave Theory and Techniques Society (IEEE MTT-S).
He served as co-chair of the IEEE MTT-S Technical Committee Digital Signal Processing (MTT-9), regularly acts as reviewer and TPRC member for several journals and conferences, and currently serves as co-chair of the Technical Committee on Aerospace Systems (MTT-29) as well as associate editor of the Transactions on Microwave Theory and Techniques. He was a Distinguished Microwave Lecturer (DML) for the DML term 2018-2020 with a presentation on signal processing and system aspects of automotive radar systems.

Radar systems are a key technology of modern vehicle safety & comfort systems. Without doubt it will only be the symbiosis of Radar, Lidar and camera-based sensor systems which can enable advanced autonomous driving functions soon. Several next generation car models are such announced to have more than 10 radar sensors per vehicle, allowing for the generation of a radar-based 360° surround view necessary for advanced driver assistance as well as semi-autonomous operation. Hence the demand from the automotive industry for high-precision, multi-functional radar systems is higher than ever before, and the increased requirements on functionality and sensor capabilities lead to research and development activities in the field of automotive radar systems in both industry and academic worlds.

Current automotive radar technology is almost exclusively based on the principle of frequency-modulated continuous-wave (FMCW) radar, which has been well known for several decades. However, together with an increase of hardware capabilities such as higher carrier frequencies, modulation bandwidths and ramp slopes, as well as a scaling up of simultaneously utilized transmit and receive channels with independent modulation features, new degrees of freedom have been added to traditional FMCW radar system design and signal processing. The anticipated presentation will accordingly introduce the topic with a review on the fundamentals of radar and FMCW radar. After introducing the system architecture of traditional and modern automotive FMCW radar sensors, with e.g. insights into the concepts of distributed or centralized processing and sensor data fusion, the presentation will dive into the details of fast-chirp FMCW processing – the modulation mode which is used by the vast majority of current automotive FMCW radar systems. Starting with the fundamentals of target range and velocity estimation based on the radar data matrix, the spatial dimension available using modern single-input multiple-output (SIMO) and multiple-input multiple-output (MIMO) radar systems will be introduced and radar processing based on the radar data cube or higher-dimension radar-data tensors is discussed. Of interest is the topic of angular resolution – one of the key drawbacks which e.g. render Lidar systems superior to radar in some situations. Consequently, traditional and modern methods for direction of arrival estimation in FMCW radar systems are presented, starting from traditional monopulse-like algorithms to modern sparse reconstruction techniques. Besides other topics such as blindness, rain & snow and near-field detection the presentation will then introduce the great challenge of FMCW radar system interference. While FMCW radar interference is a challenge which can be handled using adaptive signal processing in today’s systems, it will become a severe problem with the increasing number of radar-sensors equipped vehicles in dense traffic situations in the near future and a solution to the expected increase in interference is still an open question.

It is this problem of interference, together with some added functionality, which motivated the proposal of alternative radar waveforms such as pseudo-random or orthogonal-frequency division multiplexing (OFDM) radar for automotive radar systems. Although not yet of great interest from an industrial perspective, the fundamentals and capabilities of both technologies will be introduced in the remainder of the anticipated presentation.