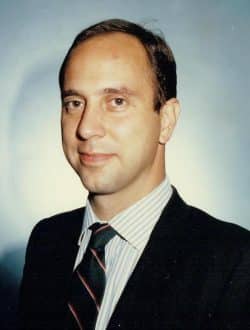 Marco Guglielmi was born in Rome, Italy, on December 17, 1954. He received the degree “Laurea in Ingegneria Elettronica” in 1979 from the University of Rome “La Sapienza”, Rome, Italy, where in 1980 he also attended the “Scuola di Specializzazione in Elettromagnetismo Applicato”. In 1981 he was awarded a Fulbright Scholarship in Rome, Italy, and an HISP (Halsey International Scholarship Programme) from the University of Bridgeport, Bridgeport, Connecticut, USA, where in 1982 he obtained an MS Degree in Electrical Engineering. In 1986 he received a PhD degree in Electrophysics from the Polytechnic University, Brooklyn, New York, USA. From 1984 to 1986 he was Academic Associate at Polytechnic University, and from 1986 to 1988 he was Assistant Professor in the same institution. From 1988 to 1989 he was Assistant Professor at the New Jersey Institute of Technology, Newark, New Jersey, USA. In 1989 he joined the European Space Agency as a Senior Microwave Engineer in the RF System Division of the European Space Research and Technology Centre (ESTEC), Noordwijk, The Netherlands, where he was in charge of the development of microwave filters and electromagnetic simulation tools. In 2001 he was appointed Head of the Technology Strategy Section of ESTEC where he contributed to the development of management processes and tools for the formulation of a European strategy for Space Technology Research and Development.
In 2014 Dr Guglielmi retired from the European Space Agency and is currently holding the position of Invited Senior Researcher at the Polytechnic University of Valencia, Valencia, Spain. Dr Guglielmi has been elevated to the grade of Fellow of the IEEE in January 2013 “For contributions to multimode equivalent networks and microwave filter design”. In January 2020 Dr Guglielmi achieved the status of Life Fellow.