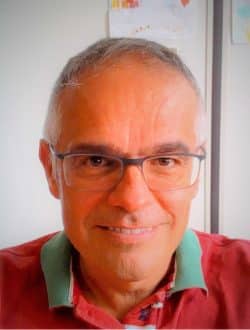 Marco Farina (M’98-SM’08) was born in Luzern (Switzerland) in 1966; received the “Laurea” degree “summa cum laude” in 1990 and the Ph.D. degree in 1995, both in Electronic Engineering from the University of Ancona, Italy. Since 1999 is professor (currently Full Professor) in Electromagnetics at the Università Politecnica delle Marche (Italy); Prof. is in the Technical Committee of the IEEE MTT-Society TC-25 ” RF-Nanotechnology” and Senior Member of IEEE. He is author of the electromagnetic modeling software EM3DS, used by several institutions, laboratories and companies for research and design work, and also in the past (optionally) embedded in the AWR/National Instruments tool “Microwave Office”, in Coventor’s tool “Coventorware” (until 2012) and in the software “Intellisuite” by Corning Intellisense (until 2004). Dr. Farina designed and realized a hybrid STM/ Near Field Scanning Microwave Microscope (SMM), and recently introducing a new “inverted” SMM; the microscopy work was awarded by grants from US Army Research Laboratory and US Air Force Office of Scientific Research. His research interests include electromagnetic modeling of passive and active components/structures, scanning probe microscopy, nanotechnology and measurement techniques. He holds a patent for multimodal calibration of VNA (with Prof. A. Morini) whose idea was awarded ITI-A and ITI-B contracts by ESA; he co-authored the book “Advanced electromagnetic analysis of passive and active planar structures” for IET and published papers in several international interdisciplinary and physics journals such as Nature Communications, Applied Physics Letters, Nanoscale, IEEE Transactions on Microwave Theory and Techniques etc. The paper “Microwave Microscopy for Nanoscale Characterization, Imaging and Patterning of Graphene” has been awarded the Best Conference Paper Award at 3M-Nano 2014 (International Conference on Manipulation, Manufacturing and Measurement on the Nanoscale, Taipei, Taiwan, November 2014).