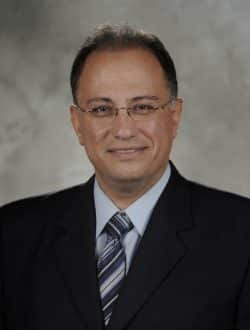 He is currently a Ken Byers Professor in the area of flexible electronics with the School of ECE, Georgia Tech and he has published more than 600 papers in refereed Journals and Conference Proceedings, 5 books and 25 book chapters. He has served as the Head of the Electromagnetics Technical Interest Group of the School of ECE, Georgia Tech. Also, he has served as the Georgia Electronic Design Center Associate Director for RFID/Sensors research from 2006-2010 and as the GT-Packaging Research Center (NSF-ERC) Associate Director for RF research and the leader of the RF/Wireless Packaging Alliance from 2003-2006. Also, Dr. Tentzeris is the Head of the A.T.H.E.N.A. Research Group (20 students and researchers) and has established academic programs in 3D Printed RF electronics and modules, flexible electronics, origami and morphing electromagnetics, Highly Integrated/Multilayer Packaging for RF and Wireless Applications using ceramic and organic flexible materials, paper-based RFIDs and sensors, inkjet-printed electronics, nanostructures for RF, wireless sensors, power scavenging and wireless power transfer, Microwave MEM’s, SOP-integrated (UWB, mutliband, conformal) antennas and Adaptive Numerical Electromagnetics (FDTD, MultiResolution Algorithms). He was the 1999 Technical Program Co-Chair of the 54th ARFTG Conference and he is currently a member of the technical program committees of IEEE-IMS, IEEE-AP and IEEE-ECTC Symposia. He was the TPC Chair for the IMS 2008 Conference and the Co-Chair of the ACES 2009 Symposium. He was the General Co-Chair of the 2019 IEEE APS Symposium in Atlanta and the Chairman for the 2005 IEEE CEM-TD Workshop. He was the Chair of IEEE-CPMT TC16 (RF Subcommittee) and he was the Chair of IEEE MTT/AP Atlanta Sections for 2003. He is a Fellow of IEEE, a member of MTT-15 Committee, an Associate Member of European Microwave Association (EuMA), a Fellow of the Electromagnetics Academy, and a member of Commission D, URSI and of the the Technical Chamber of Greece. He is the Founder and Chair of the newly formed IEEE MTT-S TC-24 (RFID Technologies). He is one of the IEEE C-RFID DIstinguished Lecturers and he has served as one IEEE MTT-Distinguished Microwave Lecturers (DML) from 2010-2012. His hobbies include basketball, swimming, ping-pong and travel.

In this talk, inkjet-printed UHF and microwave circuits fabricated on paper substrates are investigated for the first time as an approach that aims for a system-level solution for fast and ultra-low-cost mass production. First, the RF characteristics of the paper substrate are presented by using the microstrip ring resonator in order to characterize the relative permittivity and loss tangent of the substrate at the UHF band for the first time reported. A UHF RFID tag module is then developed with the inkjet-printing technology, proving this approach could function as an enabling technology for much simpler and faster fabrication on/in paper. Simulation and well-agreed measurement results, which show very good agreement, verify a good performance of the tag module. In addition, the possibility of multilayer RF structures on a paper substrate is explored, and a multilayer patch-resonator bandpass filter demonstrates the feasibility of ultra-low-cost 3-D paper-on-paper RF/wireless structures. Various examples of inkjet-printed nanostructures (e.g. CNT’s) on paper as well as benchmarking with other flexible materials (e.g., LCP) will conclude the talk.