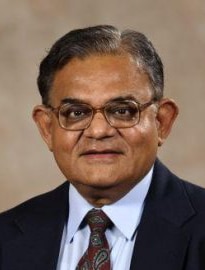 Madhu S. Gupta completed his undergraduate work in physics at Lucknow University, India, and in electronic engineering at Allahabad University, India, before receiving the master’s and Ph.D. degrees in electrical engineering from the University of Michigan, Ann Arbor. He has served as a faculty member at the Massachusetts Institute of Technology, the University of Illinois, and Florida State University (where he was a department chairman), along with shorter visiting appointments at the University of California, Santa Barbara, and the University of California, Los Angeles. In addition, he worked as a senior member of the technical staff and a program manager at Hughes Aircraft Company, in Malibu, Torrance, and El Segundo, California. Since 2000, he is the RF Communications Systems Industry Chair Professor in Electrical Engineering at San Diego State University, where he also serves as the director of the Communication Systems and Signal Processing Institute and is an adjunct professor of Electrical and Computer Engineering Department at the University of California, San Diego. Prof. Gupta is perhaps best known for his fundamental work on noise in microwave devices and integrated circuits, for which he was elected as a Fellow of the IEEE, but has also worked in a number of other areas ranging from microwave components to automotive radars. During his two decades in academia, his work concerned characteristics and limitations of nonlinear, active, and noisy microwave devices, and thermal fluctuations. During a decade of work in industry, he worked on advancements in low-noise technology development, power combining, MMICs, RF CAD, and microwave packaging.

Prof. Gupta began serving the IEEE MTT-S as the chair of the Boston and Chicago Chapters and, in the past two decades, has worked for the Society in numerous capacities, including service on and chairing of TCs, speakers’ bureau, standards committee, editorial board, technical program committees, conference steering committees, and the AdCom. He is the only person ever to have been the editor of each of the three publications of the MTT-S: as editor-in-chief of IEEE Microwave and Guided Wave Letters (1998–2000), as editor-in-chief of IEEE Microwave Magazine (2003–2005), and as a guest editor of a special issue of MTT Transactions (April 2003).

Prof. Gupta is well known as an entertaining, enlightening, and inspiring speaker and has received numerous awards over the years for excellence in teaching, beginning in graduate school with an Outstanding Teaching Fellow award at the University of Michigan. Additional awards include a Lilly Fellowship in the Division for Study and Research in Education at MIT and, most recently, the 2004 Alumni Association Award for Outstanding Faculty Contributions and the Northrop Grumman Excellence in Teaching Award. Of his many contributions over the years, one that is relevant to the present award is book he edited titled Teaching Engineering: A Beginner’s Guide, published by IEEE Press in 1987. He has organized many special sessions, workshops, and forums on themes related to engineering education at the IMS as well as at the European Microwave Symposium. He writes a column called “Educator’s Corner” for IEEE Microwave Magazine and has contributed to the field of engineering education in the areas of curriculum design, educational evaluation, and enhancing student learning.

Microwave Engineering: What is it, where is it headed, and how it serves the mankind

This talk is aimed at graduate (and advanced undergraduate) students who are preparing for, or are considering, a career in the field of RF and microwave engineering. The pre-requisites for appreciating the talk are minimal, and include some familiarity with electromagnetics and radio frequency electronics.

The talk consists of three components of about equal duration: