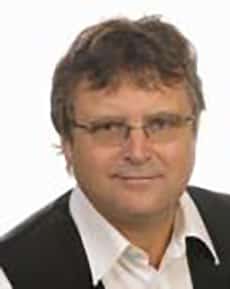 Leonhard Reindl received his Diploma in Physics from Technical University of Munich, Germany, in 1985 and his Dr. sc. techn. from University of Technology Vienna, Austria, in 1997. In April 1985 Dr. Reindl joined the surface acoustic wave group of the Siemens Corporate Technology Division, Munich, Germany. At Siemens Dr. Reindl contributed to the development of SAW convolvers, dispersive, tapped, and reflective delay lines. His primary interest was in the development and application of SAW ID-tag and wireless passive SAW sensor systems. In April 1999 Dr. Reindl joined the Institute of Electrical Information Technology, Clausthal University of Technology, where he became professor of communications and microwave techniques. In May 2003 he accepted a full professor position as the chair for Electrical Instrumentation at the Institute for Microsystem Technology (IMTEK) at the University of Freiburg, Germany. Dr. Reindl is member of the IEEE, of the TPCs of IEEE Frequency Control Symposium, IEEE Ultrasonics Symposium, Eurosensors, Sensors and of the German biannual Symposium Sensoren und Messsysteme. He is member of the European Security Research and Innovation Forum ESRIF. He has been elected member of the AdCom of the IEEE UFFC society in 2005 to 2007. He holds more than 30 patents on SAW devices and wireless passive sensors and has authored or co-authored more than 150 papers in this field.

In the recent years unwired SAW sensors and identification tags have come under notice with a growing number of publications and applications. In this presentation the operating principles of wireless passive, mostly SAW-based identification marks and sensors are shown.

In the presentation, the transponder setup using a reflective delay line, resonator, or impedance sensor is discussed in detail, as well as the setup of the readout unit using a pulse of FMCW radar. Special emphasis is set on the achievable accuracy and on the sensitivity range. Several applications of such sensor systems and their state-of-the-art performance are presented by way of examples which include identification marks and wireless measurements of temperature, pressure, torque, acceleration, tire-road friction, magnetic field, and water content of soil. A discussion of other resonant structures which also could be used in a passive transponder system will close the presentation.