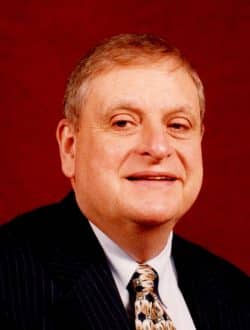 Larry Whicker obtained the BS and MS degrees in Electrical Engineering from the University of Tennessee. He was a Ford Foundation Fellow at Purdue University where he obtained the PhD in Engineering and Physics. His industrial career consisted of work at Sperry Microwave Electronics Co., the Westinghouse Electric Co., and the Naval Research Laboratory. At the Naval Research Laboratory he was Head of the Microwave Technology Branch where he directed microwave and millimeter wave research programs. At Westinghouse he first directed research and development programs on latching ferrite phase shifters and reciprocal dual mode phase shifters. In later assignments he managed the GaAs Laboratory and development of GaAS amplifiers and circuits for phased array modules. In addition to his work in industry he has taught courses at Purdue, The University of Maryland, and The University of NC – Charlotte (UNCC). He has published more than 100 technical papers in IEEE and other journals. He became an IEEE Fellow in 1980; received the IEEE Centennial Medal; and the Aviation Week Laurels Award in 1990 for microwave integrated circuits. Since retiring from industry in 1997, he and his wife Margaret have moved to Charlotte, NC. Here he has been an Adjunct Professor at UNCC. Additionally he serves as a consultant to IMS and RFIC Symposia and is Administrator for the MTT Technical Committees. Larry Whicker has served the IEEE/MTT throughout his career. A partial listing of these activities are: Served as Chapter Chair for both the Baltimore and Washington MTT Chapters.; Elected to the MTT ADCOM in 1972. Here, he chaired several committees including Membership Services, Meetings and Symposia, and Chapter Services. He was elected ADCOM President in 1977. In this capacity he assisted in negotiating the first agreement with Horizon House to manage the IMS Exhibits. Today he remains active on ADCOM as an MTT Past President (Old Elephant). During the 1970–1980 period he served on three IMS Steering Committees; served as General Chair for the 1980 IMS in Washington, DC., and served on over 20 IMS Technical Program Committees. During the 1980s, he served as IEEE TAB Meetings Chair and later as IEEE TAB Publications Chair.