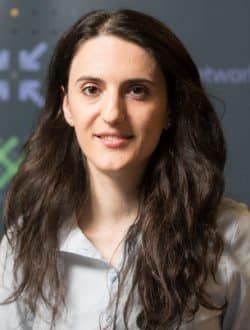 Kyriaki Niotaki received her BSc degree in Informatics and her MSc degree in Electronic Physics (with specialization in Electronic Telecommunications Technology) from Aristotle University of Thessaloniki, Thessaloniki, Greece, in 2009 and 2011, respectively. She was awarded her Ph.D. from Polytechnic University of Catalonia (UPC), Barcelona, Spain, in 2014, for her thesis on the design of efficient microwave power amplifier systems. In 2015, she was a visiting researcher at RF and Microwave Research group in University College Dublin, Dublin, Ireland. Her short stay was funded by COST IC1301 action on Wireless Power Transmission for Sustainable Electronics.

After the completion of her PhD studies, she spent a few years in industry as an RF Design Engineer, where she worked on the design of 4G small cells, before returning to academia. In 2018, she joined Maynooth University, Maynooth, Ireland, initially as a Post-Doctoral Researcher and subsequently as a Lecturer/Assistant Professor. She also spent one semester lecturing in Maynooth International Engineering College in Fuzhou, China.

She is currently an Associate Professor at Communications and Electronics department at Télécom Paris, Paris, France. Her main research interests lie in the field of RF, microwave and millimeter wave circuits and systems for wireless sensor networks and the Internet of Things applications. Kyriaki was the recipient of the IEEE Microwave Theory and Techniques Society (MTT-S) graduate fellowship and the co-recipient of the best paper award in 2014 IEEE RFID Technologies and Applications conference.