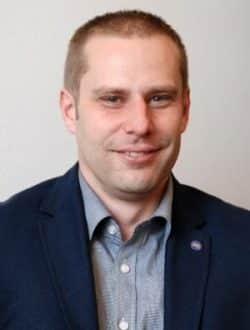 Krzysztof Wincza was born in Walbrzych, Poland, on May 27, 1979. He received the M.Sc. degree and the Ph.D. degree in electronics and electrical engineering from the Wroclaw University of Technology, Poland, in 2003 and 2007, respectively. In 2007, he joined the Institute of Telecommunications, Teleinformatics and Acoustics, Wroclaw University of Technology, and since 2009 he has held the position of an Assistant Professor at the Department of Electronics at AGH University of Science and Technology, Krakow, Poland, where in 2012 he received the D.Sc. degree (habilitation). In 2012 dr. Wincza attended the training program at the Stanford University, USA.

He is currently a member of the Editorial Boards of the IEEE Microwave and Wireless Components Letters and the Technical Program Committee of the International Conference on Microwaves, Radar, and Wireless Communications (MIKON). He served as an expert of the European Union COST 284 Project (2003-2006) and as an expert of the Polish National Science Center (2012-2014).

Dr. Wincza was the recipient of The Youth Award presented at the 10th National Symposium of Radio Sciences (URSI) and the Young Scientist Grant awarded by the Foundation for Polish Science in 2001 and 2008, respectively.