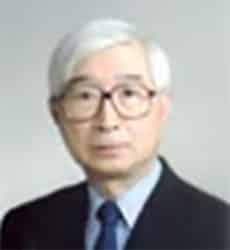 Koji Mizuno was graduated from the Department of Electronic Engineering, Tohoku University, Sendai, in 1963. He completed his Doctorate in Engineering in 1968. After being a research associate and an associate professor, he was appointed Professor (RIEC, Research Institute of Electrical Communication) at the same University in 1984. He was a visiting researcher at the University of London, London, in 1972, and at California Institute of Technology, Pasadena, in 1990.

He concurrently served as a team leader at the Photodynamics Research Center, the Institute of Physical and Chemical Research (RIKEN), Sendai, from 1990-1998. In 2004 he was appointed Professor Emeritus of Tohoku University and also Research Professor of RIEC. During this time, he was involved in the research and development of devices and measuring instruments in the millimeter- and submillimeter-wave band. He received the IEEE Fellow grade in 1993, the Kenneth J. Button Medal in 1998, and the Minister Award of MEXT (Ministry of Education, Culture, Sports, Science and Technology, Japan) in 2003. His hobbies are sailing and playing the flute.