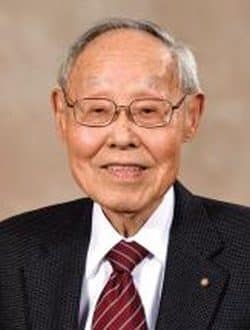 Kiyo Tomiyasu was born in Las Vegas, Nevada on September 25, 1919. He received the B.S. degree in Electrical Engineering from the California Institute of Technology, Pasadena, in 1940 and the M.S. degree in Communication Engineering from Columbia University, New York, NY, in 1941. He studied at Stanford University, Stanford, California, under a Low Scholarship and then entered Harvard University, Cambridge, Massachusetts, where he continued graduate work with a Gordon McKay Scholarship and received the Ph.D. degree in Engineering Science and Applied Physics in 1948. He served as a Teaching Fellow, Research Assistant, and Instructor at Harvard University, In 1949 he joined the Sperry Gyroscope Company, Great Neck, New York, as a Project Engineer, and in 1952 was promoted to Engineering Section Head for Microwave Research in the Microwave Components Department. In this capacity he was responsible for developments on ferrites, microwave components, spectroscopy and radiometers. In 1955 he joined General Electric Microwave Laboratory, Palo Alto, California, as a Consulting Engineer, and five years later he transferred to the General Electric Research and Development Center, Schenectady, New York, where he was involved with lasers and microwave projects. [n 1969 he became a Consulting Engineer at General Electric Valley Forge Space Center, Philadelphia, Pennsylvania. For the past several years he has been involved with microwave remote sensing of the earth using satellite-borne radiometers, scatterometers and synthetic aperture radar. He helped design the NASA/JSC Skylab S-193 Microwave Radiometer Scatterometer Altimeter, and he was a Principal Investigator of the NASA Langley Research Center AAFE RADSCAT sensor. On SEASAT, he was responsible for specifying the spacecraft interfaces with the scatterometer and synthetic aperture radar. Several papers on remote sensing of the earth using microwave sensors have been published and presented by him at various symposia. Recent configurations discussed have been a monostatic synthetic aperture radar from a nutating satellite in geosynchronous orbit, and a bistatic synthetic aperture radar employing two satellites. He has also worked on a conceptual design of a coarse resolution, wide swath synthetic aperture radar for imaging sea ice, oceanic oil spills and geologic features, and inferring soil moisture. He has been concerned with the propagation of microwave signals through rain, the troposphere and the ionosphere. His total publications list over sixty papers and twenty patents have been issued in his name. In 1977 he was granted a General Electric Company Charles Proteus Steinmetz Award for outstanding individual achievement over a sustained period as evidenced by impact on the company and society. As part of this award a $5,000 stipend was designated to California Institue of Technology to be used for three annual scholarships.