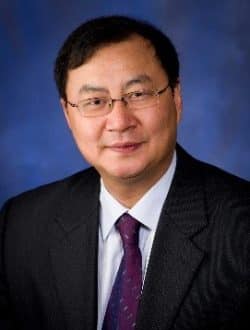 Dr. Ke Wu (Fellow, IEEE) received the B.Sc. degree (Hons.) in radio engineering from Nanjing Institute of Technology (now Southeast University) in 1982, the D.E.A. degree (Hons.) and the Ph.D. degree (Hons.) in optics, optoelectronics, and microwave engineering, all from the Institut National Polytechnique de Grenoble (INPG) and University of Grenoble, France, respectively in 1984 and 1987. He is currently the Industrial Research Chair in Future Wireless Technologies and Professor of Electrical Engineering with the Polytechnique Montréal (University of Montreal), where he is also the Director of the Poly-Grames Research Center. He was the Canada Research Chair in RF and millimeter-wave engineering and the Founding Director of the Center for Radiofrequency Electronics Research of Quebec. Dr. Wu has graduated over 75 Ph.D. and 95 M.Sc. Students. He has authored/co-authored over 1400 referred papers, and a number of books/book chapters and filed more than 80 patents. Dr. Wu was the General Chair of the 2012 IEEE MTT-S International Microwave Symposium, and the 2016 President of the IEEE Microwave Theory and Techniques Society (MTT-S). He also served as the inaugural representative of the North America in the General Assembly of the European Microwave Association. He was the recipient of many awards and prizes including the 2021 EIC Julian C. Smith Medal, 2022 IEEE MTT-S Outstanding Educator Award, and 2022 IEEE AP-S John Kraus Antenna Award. He was an IEEE MTT-S Distinguished Microwave Lecturer. Dr. Ke Wu is a Fellow of the Canadian Academy of Engineering and the Royal Society of Canada, and a Member of National Academy of Science and Engineering of Germany.