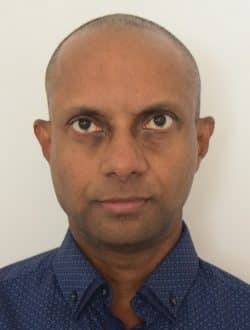 Karu Esselle (M’92-SM’96-F’16), is the Distinguished Professor in Electromagnetic and Antenna Engineering at the University of Technology Sydney and a Visiting Professor of Macquarie University, Sydney. According to a Special Report on Research published by The Australian national newspaper in 2019, he is the National Research Field Leader in Australia in Microelectronics in Engineering Discipline as well as in the Electromagnetism field in the Disciplines of Physics and Mathematics.

Karu received BSc degree in electronic and telecommunication engineering with First Class Honours from the University of Moratuwa, Sri Lanka, and MASc and PhD degrees in electrical engineering from the University of Ottawa, Canada. Previously he was Director of WiMed Research Centre and Associate Dean – Higher Degree Research (HDR) of the Division of Information and Communication Sciences. He has also served as a member of the Dean’s Advisory Council and the Division Executive. Karu is a Fellow of IEEE, the Royal Society of New South Wales and Engineers Australia.

Since 2018, Karu has been chairing the Distinguished Lecturer Program Committee of the IEEE Antennas and Propagation (AP) Society. Karu is also the Chair of the Board of management of Australian Antenna Measurement Facility, and was the elected Chair of both IEEE New South Wales (NSW) Section, and IEEE NSW AP/MTT Chapter, in 2016 and 2017. Karu has authored approximately 600 research publications and his papers have been cited over 9,300 times. Since 2002, his research team has been involved with research grants, contracts and PhD scholarships worth about 20 million dollars, without counting the 245 million-dollar SmartSat Corporative Research Centre. His research has been supported by many national and international organisations.

Karu has provided expert assistance to more than a dozen companies including Intel, Hewlett Packard Laboratory (USA), Cisco Systems (USA). His team designed the high-gain antenna system for the world’s first entirely Ka-band CubeSat made by Audacy, USA and launched to space by SpaceX in December 2018. This is believed to be the first Australian-designed high-gain antenna system launched to space, since CSIRO-designed antennas in Australia’s own FedSat launched in 2002.

Karu is in the College of Expert Reviewers of the European Science Foundation (2019-22) and he has been invited to serve as an international expert/research grant assessor by several other research funding bodies as well, including the European Research Council and national agencies in Norway, the Netherlands, Canada, Finland, Hong-Kong, Georgia, South Africa and Chile. In addition to the large number of invited conference speeches he has given, he has been an invited plenary/extended/keynote speaker of several IEEE and other conferences including EuCAP 2020 Copenhagen, Denmark; URSI’19 Seville, Spain; and 23rd ICECOM 2019, Dubrovnik, Croatia.

Karu is an Associate Editor of IEEE Transactions on Antennas Propagation as well as IEEE Access. He is a Track Chair pf IEEE AP-S 2020 Montreal, Technical Program Committee Co-Chair of ISAP 2015, APMC 2011 and TENCON 2013 and the Publicity Chair of ICEAA/IEEE APWC 2016, IWAT 2014 and APMC 2000.