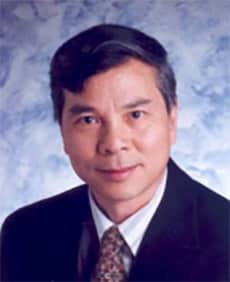 Kai Chang received the B.S.E.E. degree from the National Taiwan University, Taipei, Taiwan, the M.S. degree from the State University of New York at Stony Brook, and Ph.D. degree from the University of Michigan, Ann Arbor, in 1970, 1972, and 1976, respectively. From 1972 to 1976, he worked for the Microwave Solid-State Circuits Group, Cooley Electronics Laboratory of the University of Michigan as a Research Assistant. From 1976 to 1978, he was employed by Shared Applications, Inc., Ann Arbor, where he worked in computer simulation of microwave circuits and microwave tubes. From 1978 to 1981, he worked for the Electron Dynamics Division, Hughes Aircraft Company, Torrance, CA, where he was involved in the research and development of millimeter-wave solid-state devices and circuits, power combiners, oscillators and transmitters. From 1981 to 1985, he worked for the TRW Electronics and Defense, Redondo Beach, CA, as a Section Head, developing state-of-the-art millimeter-wave integrated circuits and subsystems including mixers, VCOs, transmitters, amplifiers, modulators, upconverters, switches, multipliers, receivers, and transceivers.

He served as the editor of the four-volume Handbook of Microwave and Optical Components published by John Wiley in 1989 and 1990 (second edition 2003), and the editor for the Wiley Encyclopedia of RF and Microwave Engineering (6 volumes, 2005). He is the editor of the Microwave and Optical Technology Letters and the Wiley Book Series in Microwave and Optical Engineering (over 70 books published). He has published over 240 journal papers, 220 conference papers, and many book chapters in the areas of microwave and millimeter-wave devices, circuits, and antennas. He has graduated over 25 Ph.D. students and over 35 M.S. students. Dr. Chang is a Fellow of IEEE. He has served as the technical committee members and session chairs for IEEE MTTS, APS, and many international conferences. He was the Vice General Chair for the 2002 IEEE International Symposium on Antennas and Propagation. He received the Special Achievement Award from TRW in 1984, the Halliburton Professor Award in 1988, the Distinguished Teaching Award in 1989, the Distinguished Research Award in 1992, and the TEES Fellow Award in 1996 from the Texas A&M University.