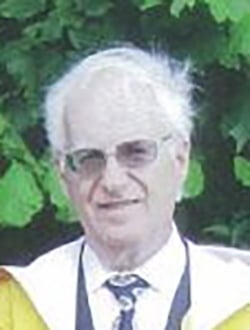 Professor Joseph Helszajn was born in Belgium in 1934 and recently passed away.  He moved to England in 1946.  During his career he worked for significant amounts of time in the United Kingdom, United States and Canada.  His formal education was spread over several institutions and he received his Doctor of Engineering from Leeds University in 1995.

He was an esteemed international authority on non-reciprocal microwave circuits and devices.  He made extremely valuable contributions to the field of ferro-electric components and to the design of such.  Examples of his work are high power circulators and isolators. His work gave him the opportunity to generate many papers and work with other highly recognized engineers.  Some of this work was done at prestigious facilities such as Sylvania Electric, Raytheon, MIT Lincoln Labs, etc.

Prof. Helszajn authored a dozen engineering text books on the subject of non-reciprocal and YIG devices.  He also wrote over 150 papers and 35 articles with more than fifty colleagues in industry and academia.  He served as one of two Honorary Editors of the Proceedings of the IEEE Antennas and Propagation and served on the editorial board for the MTT-S Transactions.  Because of the lifetime achievements, he received some of the highest honors given by the government and royalty of the UK.  That list includes the Royal Society of Edinburgh (FRSE), and the Royal Academy of Engineering (FREng). He was the recipient of the 1995 IEEE J. J. Thomson Medal. He was appointed an Of cer of the Order of the British Empire (OBE) in the 1997 Queen’s Birthday Honours List. He was the recipient of an honorary Doctor of Engineering degree (HonDEng) from Napier University (2004) and an honorary Doctor of the University (HonDUniv) degree from Heriot Watt University (2007).