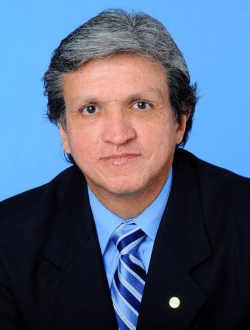 José Ernesto Rayas-Sánchez received the B.Sc. degree in electronics engineering from ITESO, Guadalajara, Mexico, the Master’s degree in electrical engineering from Monterrey Tec, Monterrey, Mexico, and the Ph.D. degree in electrical engineering from McMaster University, Ontario, Canada. He is Profesor Numerario (honorary distinction) with ITESO – The Jesuit University of Guadalajara (https://desi.iteso.mx/erayas/), where he was Chair of the Doctoral Program in Engineering Sciences from 2013 to 2019 (https://posgrados.iteso.mx/doctorado-ciencias-ingenieria). Since 2004, he leads the Research Group on Computer-Aided Engineering of Circuits and Systems (CAECAS) at ITESO (https://desi.iteso.mx/caecas/). He is a member of the Mexican National System of Researchers (SNI, for its initials in Spanish), Level II. His research focuses on computer-aided and knowledge-based modeling, design and optimization of high-frequency electronic circuits and devices.

Dr. Rayas-Sánchez serves as reviewer for many scientific publications, including IEEE Transactions on Microwave Theory and Techniques, IEEE Transactions on Antennas and Propagation, IEEE Microwave and Wireless Components Letters, IET Microwaves, Antennas & Propagation Journal, International Journal of RF and Microwave Computer-Aided Engineering, and International Journal of Numerical Modelling: Electronic Networks, Devices and Fields. He is member of the Technical Program Reviewers Committee of the IEEE MTT-S International Microwave Symposium (IMS) (https://ims-ieee.org/). He was Chair (2018-2019) and Vice-Chair (2016-2017) of the Technical Committee on Computer Aided Design (MTT-1, https://tc1.mtt-tcc.org/) of the IEEE Microwave Theory and Techniques Society (MTT-S). Since 2019, he is the MTT-S Representative for IEEE EDA Council (https://ieee-ceda.org/board-governors). He was the General Chair of the First IEEE MTT-S Latin America Microwave Conference (LAMC-2016, Puerto Vallarta, Mexico, Dec. 2016, http://2016.lamc-ieee.org/). During 1994-1996, he was the IEEE Guadalajara Section Chair. During 2004-2005, he was the IEEE Mexican Council Chair, as well as the IEEE Region 9 Treasurer. Since 2013, he is IEEE MTT-S Regional Coordinator for Latin America (https://www.mtt.org/adcom-committees). He has been an elected AdCom member of the IEEE MTT-S for the years 2016-2021 (https://www.mtt.org/administrative-committee-officers/).

This talk provides a brief overview of the most fundamental space mapping optimization methods developed until now. It explains in more detail the space mapping technique most widely adopted in industry and academia: the Broyden-based input space mapping algorithm, better known as aggressive space mapping (ASM). The two main characteristics that explain its popularity are illustrated: 1) simplicity, and 2) efficiency (when it works, it works extremely well). The fundamentals behind ASM are explained, accentuating key steps for its successful practical implementation, as well as typical scenarios where it may fail. A number of classical as well as recent industrial applications in different engineering fields are illustrated. Finally, some future directions regarding space mapping design optimization are ventured.