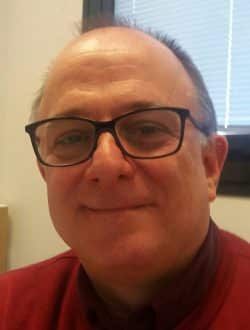 José Angel García (S’98–A’00–M’02) received the B.Sc. degree in Telecommunications Engineering from the Instituto Superior Politécnico “José A. Echeverría” (currently the Technological University of Havana, ISPJAE), Havana, Cuba, in 1988. He received the Ph.D. degree from the University of Cantabria, Santander, Spain, in 2000, thanks to a MUTIS grant for doctoral studies from the Spanish Ministry of Foreign Affairs.
From 1988 to 1991, he was a Radio System Engineer with a high-frequency (HF) communication center, where he designed antennas and HF circuits. From 1991 to 1995, he was an Instructor Professor with the Telecommunication Engineering Department, ISPJAE. He worked for Thaumat Global Technology Systems as a Radio Design Engineer, involved with base-station arrays, between 1999 and 2000. From 2000 to 2001, he was a Microwave Design Engineer/Project Manager with TTI Norte, during which time he was in charge of the research line on Software Defined Radio while involved with active amplifying antennas. In 2002, he went back to the University of Cantabria as a Senior Research Scientist “Ramón y Cajal”, where he is currently an Associate Professor. He completed a postdoctoral stay in the Telecommunications Institute (University of Aveiro) between 2003 and 2004. During the first half of 2011, he was a Visiting Researcher with the Microwave and RF Research Group, University of Colorado at Boulder. His main research interests include the nonlinear characterization and modeling of GaN HEMTs, as well as the design of efficient RF/microwave power amplifiers, rectifiers, dc/dc power converters and wireless transmission architectures. He has led coordinated projects on linearization and high efficiency transmitters, funded by the Spanish Research, Development and Innovation Program, since 2003. He has been a reviewer for several IEEE journals and a TPRC member for IEEE MTT-S International Microwave Symposium and the European Microwave Week.