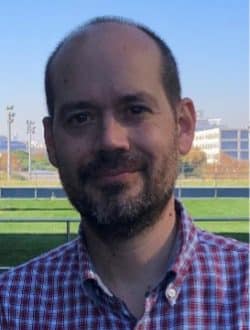 Jorge Daniel Martínez (M’09) was born in Murcia, Spain, in 1979. He received the Telecommunication Engineering degree and the PhD degree in Electrical Engineering from the Universitat Politècnica de València (UPV), València, Spain, in 2002 and 2008, respectively.

In 2002, he joined the Department of Electronic Engineering, UPV, as a research fellow. In 2007, he was a visiting researcher at XLIM CNRS-Université de Limoges, France, working on the design and fabrication of RF MEMS components at MINACOM group. He was appointed Assistant Professor at the UPV in 2009 and was promoted to Associate Professor in 2012. His current research interests are focused on emerging technologies for reconfigurable microwave components, advanced passive devices in planar and substrate integrated waveguide technologies, and multi-layer fabrication technologies for RF/microwave and millimeter-wave applications.

Dr. Martínez is also Deputy Director of the Department of Electronic Engineering and Head of the Laboratory for High Frequency Circuits (LCAF), focused on design, manufacturing and packaging of microwave and mm-wave circuits using planar and multi-layer technologies. He has authored or co-authored more than 80 publications in journals and international conferences. He serves as an Associate Editor for IEEE Microwave and Wireless Components Letters, as well as a regular reviewer for different journals, including IEEE Transactions on Microwave Theory and Techniques and IEEE Microwave and Wireless Components Letters.