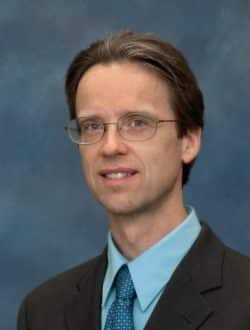 Jon Hacker is the department manager of the High Frequency Sources and Sensors Department at Teledyne Scientific. Jon has spent 20 years at Teledyne as a highly creative leader pushing the technological edge of millimeter-wave and submillimeter-wave solid-state technology to realize cost-effective and high-performance phased array sensors that can enable fantastic new capabilities for seeing and communicating. In the pursuit of this vision, Jon has captured programs worth collectively over $100M from Government agencies such as DARPA, AFRL, ARL, and others, through his ability to conceive and convincingly explain a path forward to realize technological solutions worthy of this scale of investment. He received his Ph.D. in Electrical Engineering at Caltech in 1994. He has performed pioneering research on quasi-optical power combining and frequency multiplication techniques, as well as demonstrating MMIC amplifiers operating up to 670 GHz. Jon is a Fellow of the IEEE, has served as an elected member of the IEEE Microwave Theory and Techniques Society Administrative Committee (AdCom), and Chair of the IEEE MTT-S Technical Coordinating Committee on Terahertz Technology and Applications. Dr. Hacker was recognized as Teledyne’s 2011 Technologist of the Year. Jon was the lead author on the 2013 winning paper “A 325 GHz InP Differential-Mode Amplifier” for the Tatsuo Itoh Award that is given annually to the best paper published in the IEEE Microwave and Wireless Components Letters in the previous calendar year.