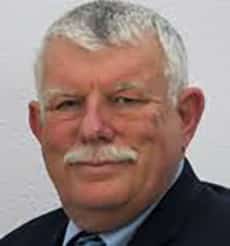 “For the development of commercial vector network analyzer technology, as embodied by the HP 8510” John T. Barr IV

John Barr retired after 37 years from Agilent Technologies / Hewlett Packard in 2008. He had served in various engineering R&D roles, including as the R&D Manager/Director for Agilent’s Wireless Semiconductor Test Solutions. John has been involved in the development and design of RF and Microwave component measurement systems. His early activities included the design of RF downconvertors, IF detectors and the automation of these systems. That later evolved into the area of vector error correction, time domain conversion and multi-parameter measurement systems. Before retiring, he concentrated in the development of high throughput manufacturing semiconductor test systems for RFICs and Wireless Communications ICs. This work in conventional and six-port network analyzers has led to five patents and ten published papers. John is active in the Microwave Theory & Techniques Society (MTT-S) as an ADCOM member, President (2002), Vice President, and Treasurer. John was General Chair of the 2006 IEEE MTT-S International Microwave Symposium and the 2012 IEEE Radio & Wireless Week General Chair. He remains active with MTT-S as an Honorary Life Member of the MTT-S AdCom. At the IEEE institute level, John is a IEEE Life Fellow and was a Member, IEEE Board of Directors / IEEE Treasurer in 2013-2014 and previously served as the IEEE Technical Activities Board Treasurer, Finance Chair for Publication Services & Products Board, member of IEEE Finance Committee and Chair of PSPB/TAB Products & Services Committee. John was a founding member and Chair of the Redwood Empire IEEE Subsection. He is presently a Member at Large on the IEEE Conferences Committee and a member of the IEEE Governance Committee. John has also been active in Automatic Radio Frequency Techniques Group (ARFTG), where he served a member of the ARFTG Executive Committee and as Vice-President and President of the organization. John was the 2017 IEEE Haraden Pratt Award recipient. “For sustained leadership and service across IEEE and Society levels” and has received the MTT-S N. Walter Cox Award (2013), Microwave Application Award (2016), and the MTT-S Distinguished Service (2017)