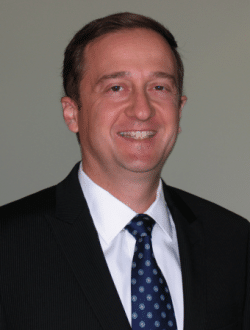 John Papapolymerou received the B.S.E.E. degree from the National Technical University of Athens, Athens, Greece, in 1993, the M.S.E.E. and Ph.D. degrees from the University of Michigan, Ann Arbor, in 1994 and 1999, respectively. From 1999-2001 he was an Assistant Professor at the Department of Electrical and Computer Engineering of the University of Arizona, Tucson and during the summers of 2000 and 2003 he was a visiting professor at The University of Limoges, France. From 2001-2005 he was an Assistant Professor at the School of Electrical and Computer Engineering of the Georgia Institute of Technology, where he is currently an Associate Professor. He has authored or coauthored over 240 publications in peer-reviewed journals and conferences. His research interests include the implementation of micromachining techniques and MEMS devices in microwave, millimeter-wave and THz circuits and the development of both passive and active planar circuits on semiconductor (Si/SiGe, GaAs) and organic substrates (liquid crystal polymer-LCP, LTCC) for System-on-a-Chip (SOC)/ System-on-a-Package (SOP) RF front ends.

Dr. Papapolymerou is the Chair for Commission D of the US National Committee of URSI. He is Associate Editor for IEEE Microwave and Wireless Component Letters and IEEE Transactions on Antennas and Propagation. During 2004, he was the Chair of the IEEE MTT/AP Atlanta Chapter. He was the recipient of the 2004 Army Research Offi ce (ARO) Young Investigator Award, the 2002 National Science Foundation (NSF) CAREER award, the best paper award at the 3rd IEEE International Conference on Microwave and Millimeter-Wave Technology (ICMMT2002), Beijing, China and the 1997 Outstanding Graduate Student Instructional Assistant Award presented by the American Society for Engineering Education (ASEE), The University of Michigan Chapter. His students have also been recipients of several awards including the Best Student Paper Award presented at the 2004 IEEE Topical Meeting on Silicon Monolithic Integrated Circuits in RF Systems, the 2007 IEEE MTT-S Graduate Fellowship, and the 2007/2008 and 2008/2009 IEEE MTT-S Undergraduate Scholarship/Fellowship.