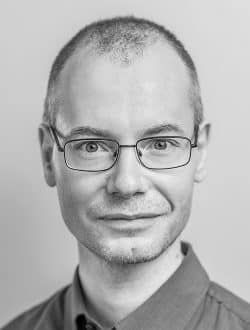 Joachim Oberhammer received M.Sc. EE from Graz University of Technology, Austria, in 2000 and Ph.D. from KTH Royal Institute of Technology in Stockholm, Sweden, in 2004. He was a Post-doctoral research fellow at Nanyang Technological University, Singapore, in 2004, and at Kyoto University, Japan, in 2008. Since 2005, he is leading radio-frequency/microwave/terahertz micro-electromechanical systems research at KTH, Associate Professor at KTH in 2010 and Professor in Microwave and THz Microsystems at KTH since 2015. He was a guest researcher at Nanyang Technological University, Singapore, in 2007, a guest researcher at NASA-Jet Propulsion Laboratory, USA, in 2014 and a guest professor at Universidad Carlos III de Madrid in 2019.

He is author and co-author of more than 100 reviewed research papers and holds 4 patents. In 2004, 2007, and 2008 he received an award by the Ericsson Research Foundation, a grant by the Swedish Innovation Bridge, and a scholarship by the Japanese Society for the Promotion of Science, respectively. The research work he is heading received six Best Paper Awards (five of which at IEEE conferences), and four IEEE Graduate Fellowship Awards (by MTT-S and by AP-S) since 2009. He served as TPRC member of IEEE Transducers (2009, 2015, 2019), IEEE International Microwave Symposiums (2010-2018), IEEE Micro Electro Mechanical Systems (2011, 2012), IEEE Radio and Wireless Week (2015, 2016), EuMCE (2019). Dr Oberhammer is Steering Group member of the IEEE MTT-S and AP-S Chapters Sweden since 2009. In 2013, he received an ERC Consolidator Grant by the European Research Council. Steering Group Member of the Young Academy of Sweden 2014-2016. Representative of Sweden/Norway/Iceland in the European Microwave Association 2016-2018. Associate Editor of IEEE Transactions on Terahertz Science and Technology since 2018.