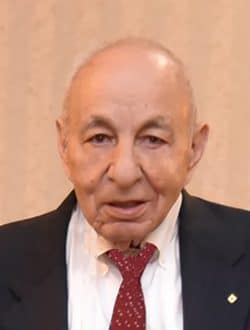 Jesse J. Taub was born on April 27, 1927 in New York City, and passed away on August 10, 2019 at the age of 92. He was a member of the Microwave Theory and Techniques Society (MTT-S) of the IEEE for over 50 years and the Archeological Institute of America.  He contributed immensely to the fields of electrical engineering, medicine, social science, microwave and millimeter wave technology.

He earned a Bachelor of Electrical Engineering from the City College of New York in 1948 and a Master of Electrical Engineering at the Polytechnic University in 1949.  From 1949 to 1955 he was group leader at the Naval Material Laboratory in Brooklyn, where he made contributions to accurate measurements and instrumentation relating to tubes and semiconductor devices. Upon leaving the Navy he joined Airborne Instruments Laboratory (AIL) in 1955 where he stayed until he retired. Jesse’s positions included staff engineer (1949 to 1955), section leader (1955 – 1958), engineer consultant for the company (1958 – 1975) and eventually chief scientist (1975 – 1993).  Here new technologies were developed, such as varactors that were used in broadband cryogenically cooled LNAs, developed by AIL, for their satellite communication terminals. He was also involved with SAW technology that was applied to EW systems.

Mr. Taub was also considered to be leader in the field of microwave and millimeter wave filters, mixers,  quasi-optical techniques for millimeter wave systems, phased arrays, power distribution systems and combiners.  He was also the driving force within AIL for MMIC programs.  That propelled AIL into the MMIC device technology such as HEMTs and other devices. After his career at AIL he consulted for numerous companies. He was a nationally recognized authority on millimeter wave technology and microwave integrated circuits with over 45 related publications.

Jesse J. Taub served with the United States Navy in 1945-1946. He was Fellow of the IEEE.  His citation was for contributions to microwave networks and millimeter quasi-optic techniques. He is a member of Sigma Xi and received the Centennial medal in 1984 and the 3rd Millennium Medal 2000, the C.A. Fowler award 1993, and Region 1 awards 2001, 2006.  He served on the MTT-S AdCom 1972-1974 and was the technical co-chair for the 1988 MTT-S Symposium in New York City.  He served on the TPRC for the MTT-S for over 40 years and served on the editorial boards of the IEEE Transactions on Microwave Theory and Techniques and the Microwave Journal.  He was also the chairman of the Long Island section awards committee, as well as the USAB Division award in 2002.  He was a member of Archaeology Institute of America, Long Island Society (vice president).  Jesse Taub is listed in Who’s Who in America.