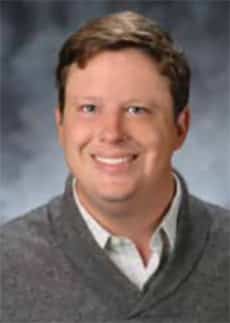 James (Jim) F. Buckwalter (S’01-M’06-SM’13) was born in Cincinnati, OH and raised in Yardley, PA. He received the B.S. degree with honors in electrical engineering from the California Institute of Technology (Caltech), Pasadena, in 1999, the M.S. degree from the University of California, Santa Barbara (UCSB), Santa Barbara, in 2002, and Ph.D. degree in electrical engineering from Caltech in 2006, where he worked under the supervision of Prof. Ali Hajimiri on deterministic jitter in highspeed serial interconnects. From 1999 to 2000, he was a Research Scientist with Telcordia Technologies where he was involved in the development of rate agile clock and data recovery circuits for burst mode optical networks. During Summer 2004, he was an intern at the IBM T. J. Watson Research Center, Yorktown Heights, NY, where he collaborated on the development of high-speed signal equalizers. After graduation from Caltech, he joined Luxtera, Carlsbad, CA and, in July 2006, he joined the faculty of the University of California – San Diego (UCSD), La Jolla as an Assistant Professor. He was promoted to Associate Professor in 2012. In January 2015, he joined the faculty of the University of California – Santa Barbara (UCSB), Santa Barbara as a Professor of electrical and computer engineering. Prof. Buckwalter is a member of the IEEE Microwave Theory and Techniques Society and has attended the International Microwave Symposium every year since 2002. From 2008-2010, he was an associate editor for the IEEE Transactions on Circuits and Systems-II. He was a member of the 2010 Technical Program Committee and has been a member of the Technical Program Review Committee from 2010-2015. Dr. Buckwalter was the recipient of a 2004 IBM Ph.D. Fellowship, 2007 Defense Advanced Research Projects Agency (DARPA) Young Faculty Award, and 2011 NSF CAREER Award. Jim is married to Dr. Juna A. Kollmeier, an Astrophysicist at the Carnegie Observatories. They have two sons.