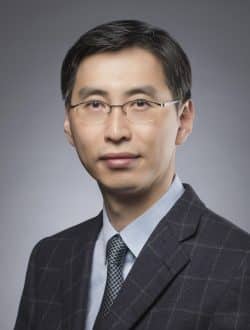 Jae-Sung Rieh received the B.S. and M.S. degrees in electronics engineering from Seoul National University, Seoul, Korea, in 1991 and 1995, respectively, and the Ph.D. degree in electrical engineering from the University of Michigan, Ann Arbor, MI, USA, in 1999. In 1999, he joined IBM Semiconductor R & D Center, where he was responsible for the development of high frequency SiGe HBT technologies. Since 2004, he has been with the School of Electrical Engineering, Korea University, Seoul, Korea, where he is currently a Professor. In 2012, he was with Submillimeter Wave Advanced Technology team (SWAT) of JPL, Pasadena, USA, during his sabbatical leave. His major research interest lies in the mm-wave and terahertz devices and circuits.
Dr. Rieh was a recipient of IBM Faculty Award (2004) and a co-recipient of IEEE EDS George E. Smith Awards (2002 and 2006) and IEEE Microwave and Wireless Component Letters Tatsuo Itoh Best Paper Award (2013). He has served as an Associate Editor of the IEEE Microwave and Wireless Components Letters (2006-2009) and the IEEE Transactions on Microwave Theory and Techniques (2010-2013).