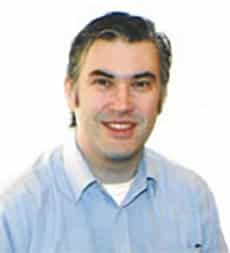 Ian Gresham was born and educated in North Wales, UK where he attended Connah’s Quay High School. He enrolled to study Electronic and Electrical Engineering at the University of Leeds, and concentrated his final year studies on Microwave Engineering. After graduating with a B. Eng (Hons.) degree in 1988, he joined Marconi Command and Control Systems, Leicester, U.K. as a Microwave Engineer developing Receiver Front-Ends, and frequency agile svnthesizers for Fire Control and Naval radar applications. In 1990, he returned to the University of Leeds and joined the Microwave and Solid-State Group to study for his Ph.D. His doctoral research focused on low-phase noise signal generation at microwave and millimeter-wave frequencies. Upon graduation in 1993, he joined M/A-COM Milton Keynes, U.K. as a Senior Engineer responsible for the design of microwave components and sub-systems for both military and commercial applications, prior to concentrating on MMIC design using GaAs HBT and pHEMT processes for wireless applications. After becoming Engineering Manager for the IC design group in the U.K., Dr. Gresham was responsible for the introduction of activities ranging from device modeling and process characterization, through to the development of design-formanufacturability methodologies. In 1997, he won the 1997 AMP Global Design for the Environment Award. In 1998, he joined the M/A-COM Corporate Research and Development centre in Lowell, MA as a Principal, and then Senior Principal Engineer. His research interests have been oriented towards the commercialization of millimeter-wave systems with particular emphasis on automotive radar, being part of the team that introduced the first 77GHz Autonomous Cruise Control into commercial production. Since 2001, his work has focused on the development of millimeter-wave Transceiver chipsets for multiple sensor applications initially at 24GHz, but also extending to Ka-band and W-band. As part of this work, he won the European Microwave Prize for 13est Conference Paper in 2003.

Dr. Gresham is a Senior Member of the IEEE and Chair of the Sensors and Sensor Systems Technical Program Committee for the Microwave Theory and Techniques Society (MTT-). He is a member of the Editorial Board for a number of refereed Journals, including the IEEE Transactions on Microwave Theory and Techniques, IEEE Microwave and Wireless Components Letters, and the International Journal of RF and Microwave ComputerAided Engineering. He served as the Directories Chair for the MTTS for a period of 5 years, and has also been active in other professional societies in organizing conferences and other technical activities. He has authored or co-authored 18 papers in refereed journals or peer-reviewed conferences, and is the holder of five US patents with an additional four pending.

In his spare time, Ian has a variety of interests. His interest in music has migrated from playing to renovating vintage Wurlitzers. He also spends several hours a week in training and playing football (a.k.a. soccer) for his local team in Boston, MA. In a similar vein, he enjoys traveling and seeing new places, and likes to combine this activity with following Liverpool Football Club – still possessing a season ticket and watching them several times a year despite the hindrance of living on a different Continent.