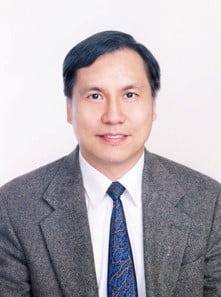 During his graduate study, he was engaged in the research on theoretical and numerical analysis of electromagnetic radiation and scattering problems.  He was also involved in the development of microwave remote detecting/sensing systems.  Dr. Wang joined Electronic Systems and Technology Division of TRW Inc. since 1987.  He has been an MTS and Staff Engineer responsible for MMIC modeling of CAD tools, MMIC testing evaluation and design and became the Senior Section Manager of MMW Sensor Product Section in RF Product Center.  He visited the Institute of Electronics, National Chiao-Tung University, Hsin-Chu, Taiwan, in 1993 to teach MMIC related topics and returned to TRW in 1994.  He joined the faculty of the Department of Electrical Engineering of National Taiwan University, Taipei, Taiwan, Republic of China, as a Professor in February 1998.  He served as the Director of Graduate Institute of Communication Engineering from Aug. 2006 to July 2009, and the Associate Dean of College of Electrical Engineering and Computer Science of National Taiwan University from Aug. 2016 to July 2018.

Dr. Wang is a member of the honor society Phi Kappa Phi and Tau Beta Pi.  He received the Distinguished Research Award of National Science Council, Taiwan, at 2003.  He was the Richard M. Hong Endowed Chair Professor of National Taiwan University in 2005-2007.  He was elected as an IEEE Fellow in 2006, and has been appointed as an IEEE Distinguished Microwave Lecturer for the term of 2007-2009.  Dr. Wang received the Academic Achievement Award from Ministry of Education, Taiwan, in 2007, and the Distinguished Research Award from Pan Wen-Yuan’s Foundation in 2008.  He has been Life National Chair Professor of Ministry of Education, Republic of China since 2014, and has been appointed as National Taiwan University Chair Professor since 2016.