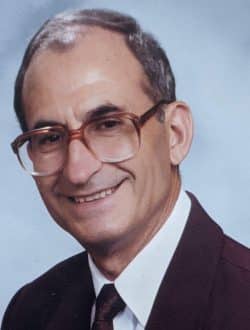 Professor Hristo Dinkov Hristov was born on July 30th, 1938 in the small agricultural town of Kameno, Burgas Region and passed away on Jan 25, 2021. In 1963 he graduated from the Technical University in Sofia, Bulgaria with an M.S. in Electrical Engineering. He majored in Radio, Telephone and Telegraph Engineering and began an outstanding career in academia.

Prof. Hristov’s first job as an Assistant Professor was with the National Military University in Shumen, Bulgaria from 1963 to 1966. In 1966 he became an Assistant Professor in “Radio Wave Propagation” at the Technical University (TU) of Varna, Department of Radioengineering. Over time he received his PhD degree in 1973 and was later elevated to Full Professor in “Antenna Feed Structures. He lectured in multiple disciplines such as EM propagation in waveguides and in space, antennas, electrodynamics, microwave and quantum optical devices, electrodynamics and optoelectronics. From 1974 to 1992 Prof. Hristov was Head of the Department of Radioengineering. From 2000 to 2014 Prof. Hristov worked as a Research Professor at the Universidad Técnica Federico Santa Maria, Valparaíso (UTSFM), Chile, where he made significant contributions to the Department and the University, and came to look upon Chile as his 2nd home country.
Prof. Hristov’s research interests included microwave/millimeter wave/terahertz antenna and propagation theory and applications, antenna miniaturization, cavity-type passive and active antennas, and Fresnel zone lenses and antennas. He published over 200 scientific articles and research reports. He is the author or co-author of antenna design books and university textbooks. In 2015 he authored the “Fresnel Zone Plate Antenna” chapter in the Handbook of Antenna Technologies, published in 2016 by Springer, Singapore.

Aside from his long research tenure at the Universidad Técnica Federico Santa Maria, Valparaíso (UTSFM), Chile, Prof. H. Hristov specialized and conducted research in a large number of renowned foreign universities and research institutes. He participated in program and organizational committees of a number of scientific conferences and symposia at home and abroad. He was an invited lecturer at the Tokyo IEEE AP/S Chapter (1990) , Sweden IEEE AP/S Chapter (1993), the European Space Technology Center (ESA/ESTEC-1993), etc. During the 1996 IEEE AP-S/URSI International Symposium in Baltimore, USA he was given the first Raj Mitra Senior Researcher Award. After 51 years of teaching and scientific research Prof. Hristov retired in 2014. In his late years Prof. Hristov actively followed the research progress in his fields of interest and had started working on a 2nd edition of his book “Fresnel Zones in Wireless Links, Zone Plate Lenses and Antennas”.

Prof. Hristov was the co-organizer and served as the first chair of the Bulgarian IEEE Section and IEEE MTT/AP-S Chapter. He participated in many IEEE MTT-S and AP functions and conferences. He was also a Member of the New York Academy of Sciences, and was listed in the Marquis, USA Who’s Who in the World.