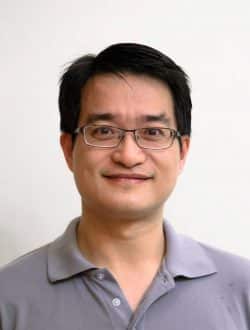 From 1998 to 1999, he was with Chunghwa Telecom Laboratories, Taoyuan, Taiwan, where he was involved in the research and development of code division multiple access (CDMA) cellular phone systems. In 2004, he was a Post-Doctoral Research Fellow with the Graduate Institute of Communication Engineering, National Taiwan University, where he was involved with research on advanced MMW integrated circuits. In February 2006, he joined the faculty of the Department of Electrical Engineering, National Central University, Taoyuan, Taiwan, where he is currently a Professor. In 2017, he joined the Department of Electrical and Computer Engineering, University of Florida, Gainesville, FL, USA, as a Visiting Scholar.  His research interests are high-speed, RF, and millimeter-wave integrated circuits (ICs) and systems for wireless communication, radar, and radiometer applications. His avocations have included amateur radio and high-fidelity audio. He is author and co-author of over 145 technical papers, one book chapter, and 5 US patents, all in the area of RFICs and systems.