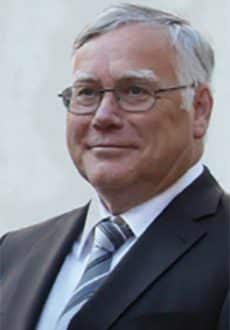 Herbert Hillbrand was born on May 22, 1946 in Feldkirch, Austria. He received the Dipl.-Ing. degree (M.S.E.E.)
in 1969 and the Dr. techn. degree (PhD. E.E.) sub auspiciis praesidentis rei publicae (under the auspices of the
Austrian Federal President) in 1972, both from the Vienna University of Technology, Austria.
From 1970 to 1973 Herbert Hillbrand worked as an assistant professor at the Institute of Physical Electronics
(Vienna University of Technology) doing research on III-V compound semiconductors. In 1973 he was a visitor
to the Royal Radar Establishment in Great Malvern, UK.
In 1973 Herbert Hillbrand joined the Research Institute of AEG-Telefunken in Ulm, Germany. His research
activities focused on theoretical studies of broad band solid state circuits, statistical noise analysis and laser
modulation. Using his studies, he developed computer programs and did computer simulations of electronic
devices and circuits.
In 1976 Herbert Hillbrand joined Alldata, a major German computer company in Munich, Germany, as a
specialist for computer simulations. In the department for technical applications he was engaged in the
development of highly sophisticated computer systems, “rst as a programmer, later as a senior manager and
head of department.
In 1988 Herbert Hillbrand advanced to the managing director of Alldata Entwicklung Informationssysteme, an a!liated company within the
Alldata group, developing authoring and payment systems. Using a newly invented and patented security technology the company developed terminal devices and computer systems.
In 1994 Herbert Hillbrand was nominated as managing director of Alldata Beratung Informationssysteme, also a company within the Alldata
group. The company was established to setup the business in the new German countries, a challenging and ambitious assignment.
Since 1997 Herbert Hillbrand has been working as an independent consultant for computer systems and networks. Based on his technical and
scienti”c background he provides highly quali”ed services to major companies in the telecommunication, banking, insurance, automotive
industry and service provider area. He also develops software for analyzing, testing and documenting systems and networks. The most important product among his developments is a software package for automated visualization of complex IT infrastructures by means of diagrams.
Herbert Hillbrand is married and has two sons and two grandchildren. He lives in Munich, Germany. Although in the process of becoming
retired he still spends a lot time with his computers, searching for problems and solutions. He likes to ride on his bikes with increasing intensity
and enjoys a visit to the Munich beer gardens. Together with his wife he is often seen in foreign countries, especially in Far East.