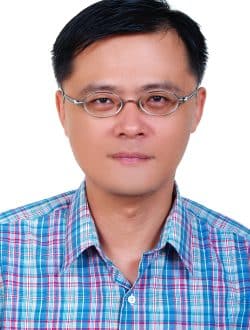 Heng-Ming Hsu received his Ph.D. degrees in Electrical Engineering from National Taiwan University, Taipei, Taiwan, in 2003. During his military service, he passed the exam for senior government service posts. In 1996 after serving in the Chinese Airfore, he worked at government organization, Taipei Rapid Transit Corporation, in Taipei, Taiwan. In 1997 he joined the Research Development department of Taiwan Semiconductor Manufacturing Company (TSMC), in Hsinchu, Taiwan, working in the Mixed-Signal/RF program of analog division. During in TSMC, he was devoted in the research of RF CMOS integrated devices in bulk silicon material such as active devices (RF CMOS and Power MOS), passive devices (high-Q inductor, transformer, MIM capacitor, varactor, among others) and the silicon substrate coupling effect. He was a pioneer in RF device characterization during working in TSMC, he participated the RF technology build up from 0.25mm, 0.18mm, 0.13mm, and 90nm technologies. He holds five US and six Taiwan patents.

In 2003 he jointed the faculty of Department of Electrical Engineering, National Chung Hsing University (NCHU), initially as an Assistant Professor and then as a Professor in 2011. He acquired the Award of Research Excellence of NCHU in 2008. He serviced as Director of Meng Yao Chip Center of Electrical Engineering Department in 2011-2013. He received the Excellent Award for Objective Research Project in Ministry of Science and Technology (MOST) of Taiwan in 2011. He acquired the Excellence of Education Project in 2012. He serviced as a general chair of 2017 IEEE Wireless Power Transfer Conference. He serviced as Director of Alumni Center of National Chung Hsing University in 2020-now. His interests are the development and optimization of wireless power transfer system, and energy harvesting chip design, among others.