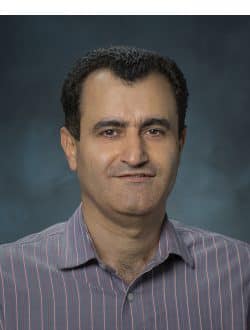 Hasan Sharifi is currently manager of RF & EO/IR Subsystems Department at HRL Laboratories, Malibu, CA. He received his bachelor’s degree in 1994 and master’s degree in 1997 in Electrical Engineering and his PhD degree in the areas of Microelectronics and Nanotechnology from Purdue University, West Lafayette in 2007. His research topics include design, fabrication and integration of RF/millimeter wave components and subsystems for next generation phased-array radar, EW and communication systems as well as low-cost, high performance EO/IR imaging sensors. Before joining HRL, he was a research staff member at Birck Nanotechnology Center, Purdue University from 2005 to 2009 working on CMOS-based RF integrated circuits as well as advanced heterogeneous integration and packaging. He has published more than 60 journal and refereed conference papers and holds more than 35 issued patents. Dr. Sharifi is the recipient of a number of awards, including special and extraordinary merit awards from Purdue University and HRL Labs. He has served as a technical program committee and editor for the IEEE Silicon Monolithic Integrated Circuits in RF Systems Conference. He is a senior member of IEEE and member of Microwave Theory and Techniques and Advanced Packaging societies.