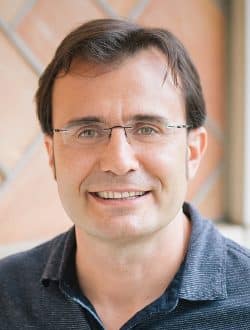 Gianluca Piazza is the ST Microelectronics Professor in the Department of Electrical and Computer Engineering at Carnegie Mellon University and the Director of the CMU Nanofabrication Facility. Prior to joining CMU he was the Wilf Family Term Assistant Professor in the department of Electrical and Systems Engineering at the University of Pennsylvania. His research interests focus on piezoelectric micro and nano electromechanicalsystems (M/NEMS) for RF wireless communication, acousto-optics, chemical/biological detection, ultrasonics, and mechanically-assisted computing. He also has a general interest in the areas of micro/nano fabrication techniques and integration of micro/nano devices with state-of-the-art electronics. He has more than 15 years of experience working with piezoelectric materials and devices. He holds several patents in the field of micromechanical resonators some of which have been acquired by industry. He received the IBM Young Faculty Award in 2006 and has won, with his students, the Best Paper Award at the IEEE Frequency Control Symposium in 2008, 2009, 2011 and 2013, and at the IEEE Ultrasonic Symposium in 2012. He serves as Editor-in-Chief for the IEEE Journal of MicroElectroMechanical Systems (JMEMS).