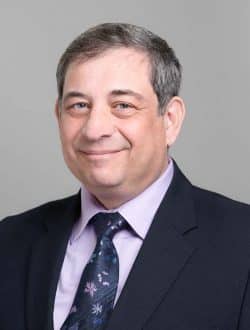 George V. Eleftheriades is a Professor and the Velma M. Rogers Graham Chair in Engineering at the Department of Electrical and Computer Engineering of  the University of Toronto. Professor Eleftheriades is a recognized international authority and pioneer in the area of metamaterials: man-made media with electromagnetic properties not found in nature. In 2002 Dr. Eleftheriades introduced a method for synthesizing high-quality metamaterials using loaded transmission lines. Together with his graduate students, he provided the first experimental evidence of imaging beyond the diffraction limit with a negative-index lens and pioneered several novel microwave and optical components, and antennas using these metamaterials. For this work, he received several awards including an NSERC E.W.R. Steacie Fellowship in 2004, the 2008 IEEE Kiyo Tomiyasu Technical Field Award, the 2015 IEEE AP-S John Kraus Antenna Award and the 2019 IEEE AP-S Distinguished Achievement Award. Professor Eleftheriades has served as the Chair of Technical Co-ordination Committee MTT-15 (Microwave Field Theory).  He is a Fellow of the Royal Society of Canada and a Fellow of the Institute of Electrical and Electronic Engineers (IEEE).