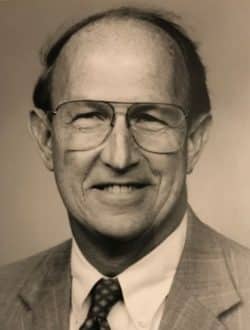 G. P (Pete) Rodrigue was born in Paincourtville, Louisiana in 1931 and received his undergraduate education at Louisiana State University. He received his Ph.D. in 1958 from Harvard University, working under Professor C. L. Hogan. From 1958 to 1968 he was with the Sperry Microwave Electronics Company in Clearwater, Florida where he worked on ferrite materials and devices, parametric amplifiers, ultrasonic devices, and microwave integrated circuits. In 1968 he joined the faculty of the School of Electrical Engineering at Georgia Tech where he is now a Regents’ Professor. He teaches graduate and undergraduate courses in electromagnetic, solid state, and circuits. His research activities have included antenna measurements and microwave devices. He was the recipient of Outstanding Teacher Awards at Georgia Tech in 1971, 1972, and 1979. In 1984, he was awarded the first IEEE Region 3 Outstanding Engineering Educator Award.

He has served on a number of Institute Committees and was Chairman of the Georgia Tech Executive Board in 1981-82. Dr. Rodrigue was first elected to the Administrative Committee of the MTT Society in 1970 and served continuously through 1980. He was MTT-S President in 1976 and Vice-President in 1975. During his time on ADCOM he was Editor of the MTT Newsletter (71-74), Chairman of the Membership Services Committee, and Chairman of the Awards Committee. He served as Chairman of the Steering Committee for the 1974 International Microwave Symposium in Atlanta, and as Keynote Speaker at the 1976 Symposium in Cherry Hill, New Jersey. He has been a member of the Program Committee for many of the MTT Symposia, and has served on the Editorial Board of the MTT-S Transactions since 1965. He was MTT-S representative on the IEEE Technical Activities Board and Division IV Representative on the IEEE Publication Board. He was the recipient of an IEEE Centennial Medal on behalf of MTT-S. Dr. Rodrigue has served the IEEE as its Vice President-Publication Activities (1982-83), on the IEEE Board of Directors and its Executive Committee, on the IEEE Long Range Planning Committee, and on the Nominations and Appointments Committee.

He was a member of the IEEE Technical Activities Board in 1976, and in 1979 and 1980 was Chairman of Technology Committees Administration. He served on the IEEE Publication Board in 1977 and 1978, and 1982 through 1984. He was named a Fellow of the IEEE in 1975. He has also been on the Steering and Program Committees of the Conference on Magnetism and Magnetic Materials, the Intermag Conference, and the Ultrasonics Symposium. He was one of the organizers of the Atlanta Section Joint MTT-S/AP-S Chapter and was its first Chairman. He has also served the Atlanta Section in various capacities.