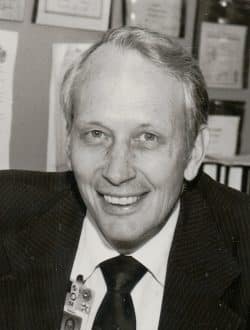 Henry George Oltman, Jr. was born in Brookhaven, Mississippi in 1927 and was raised in Albuquerque, New Mexico. He passed away on 20 February 2019 at the age of 91. His engineering-career began in 1950 at Sandia Labs after receiving degrees in Physics and mathematics, from the University of New Mexico.

In 1958 he accepted a job with the Physics Research Center at TRW. After several years, he joined the Missile Systems Division of Hughes Aircraft; in Canoga Park. There he continued his research and development of antennas for commercial and military applications.

During his career, George researched and developed a wide variety of antennas (e.g., helical, spiral, dipole, slot, microstrip, parabolic, planar, endfire and electronically scanned arrays) and other passive and active microwave components. His designs were based on all types of transmission lines. Components included filters, couplers, mm-wave devices, microwave acoustics; and microwave sources, from vacuum tubes through Gunn, IMPATT and TRAPATT solid-state sources. He also participated in early developmental work on automated microwave measurements, leading to the now widely used automatic network analyzers. From this work he was awarded eleven patents plus Hughes Aircraft’s most prestigious award, the Lawrence A Hyland Patent Award,

After retiring from Hughes, George joined Tecom as Senior VP of Research and later, as Vice President and Director of Engineering. There he worked on an electronically scanned antenna array.

Among George’s accolades, he was elected an IEEE Fellow in 1983. He is also a Fellow of the British Interplanetary Society and was awarded the Distinguished Service Award by Automated RF Technics Group (ARFTG) in 1984. In 1990, the ARFTG additionally awarded him the Automated Measurements Career Award. He was elected to Sigma Xi and Kappa Mu Epsilon. In June 2018, IEEE awarded him the Third Millennium Medal for his life-long contributions. He lived his life in pursuit of knowledge and understanding. He maintained that curiosity and his activity with the MTT-S AdCom up to time of his passing.