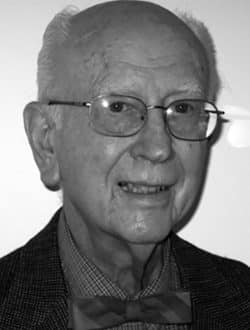 George Matthaei was a true pioneer in the development of microwave technology. He got involved in the days when generating a 1 GHz signal was almost science fiction. Through his career he made major contributions in academia and in industry.

Dr. Matthaei was born August 28, 1923 in Tacoma, Washington. He was the son of Hazel (Pfeffer) and William Peter Matthaei; and was raised in Tacoma, along with his older brother, Charles, and older sister, Margaret. He died on Oct. 20, 2020 at the age of 97.

George attended the University of Washington until April 1943 when he was called up to active duty in the army to participate in WWII. His career in microwave technology came about in a fortuitous manner. He was separated from his unit due to an illness. When he recovered his unit had already shipped out so he was assigned to an anti-aircraft unit in the South Pacific. That unit had a radar. He appointed himself to work on the radar and learned the details of the system and electronics by reading the manuals, while on night time standby duty, by flashlight.

After the war he returned to school and received his BS degree from University of Washington, Seattle, in 1948. He went on to attain a Master’s, a Professional Engineering and Ph.D. degrees from Stanford University in 1952. Then, he taught at the University of California at Berkeley until 1955. His specialty was network synthesis which supported his interest in microwaves.

At this point, George decided to take a position at the Ramo-Wooldridge Corporation (later to become TRW). There he performed system analysis and research for microwave components. This work went on for several years. He then joined the Stanford Research Institute (SRI) where he participated in writing a book on microwave filters for the Army Signal Corps. The end result of this effort was the publication of the book entitled Microwave Filters, Impedance-Matching Networks, and Coupling Structures (McGraw-Hill, 1964). This book, written in collaboration with Dr. Seymour Cohn, is a classic and on the book shelf of almost every microwave engineer. In 1962 he was promoted to Manager of Electromagnetics Techniques Laboratory at SRI.

In July 1964, he joined the Department of Electrical Engineering, University of California at Santa Barbara, as a Professor. In July 1991, he retired and became a Professor Emeritus and joined the staff of Superconductor Technologies Inc., Santa Barbara, CA, on a part-time basis until he was 85.

Aside from the aforementioned book, he has authored or coauthored numerous papers and has been a contributor to several other books. Dr. Matthaei was the recipient of the 1961 Microwave Prize of the IEEE Microwave Theory and Techniques Society (IEEE MTT-S) and the 1986 IEEE MTT-S Microwave Career Award. Dr. Matthaei is a Fellow of the IEEE, and a member of Sigma Xi and Tau Beta Pi.

George’s relaxation was in the out doors. He met his wife, Jean, while on a Sierra Club pack trip and they married in June, 1953. Once their daughters, Janie and Susie, were born, George and Jean introduced them to hiking early by carrying them as babies in an early model of backpack baby carrier. Sunday afternoon hikes to explore the wilds of California were a regular part of George’s family life for decades. Once Susie and Janie were grown up and had families of their own, summer trips to Mammoth for hiking became a tradition for 20 years, even as mobility for Jean and George became more difficult in their late 80’s.

California was George’s adopted home, but until health issues began to limit his travels, he made a point of returning to Washington every summer with Jean and the children. Both daughters have fond memories of visits. George is survived by his daughters, Jane Bell and Susan Larsen, four grandchildren, and three great grandchildren.