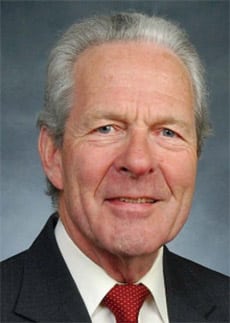 George L. Heiter received his Vordiplom and Dipl. Ing. degrees from the Universities of Darmstadt and Karlsruhe/Germany and his Ph.D. degree from Stanford University in 1957, 1959, and 1964, respectively. He joined (then) Bell Telephone Laboratories in 1963, where he worked on high-power ferrite materials and phase shifters, acoustic delay line and optical memories, and long-distance terrestrial microwave and hybrid fiber-coaxial (HFC) communication systems. He has published and holds patents in most of these areas. In 1996, he joined Analog Devices, Inc., developing multifunction chips for HFC and digital audio broadcasting (DAB) systems and working on digital subscriber line (DSL) chip set applications. He retired in December 2001 and formed Heiter Microwave Consulting, specializing in the design of communication systems. Within the IEEE MTT-S, he has been chair of the Microwave Prize Awards Committee since 1991 and an MTT representative to the European Conference on Wireless Communications, part of the European Microwave Week. He has been a member of the editorial board of MTT Transactions and IEEE Microwave and Wireless Components Letters, and an MTT Transactions guest editor for both technical special issues and the December special issues for the IMS in 2000, 2001, and 2002. He has been active in MTT TCs, chaired and cochaired the Committee on Microwave Systems (MTT-16), and is a member of MTT-9 and MTT-20. He has fostered interactions between MTT TCs, with particular attention to expanding MTT involvements into new areas, such as high-speed digital technology. As a member of the AdCom Meetings and Symposia committee, he has worked on organizational support and has been involved in a number of international conferences, most recently the Ultra Wideband and Asia Pacific Microwave Conferences. He has served as the system administrator and site coordinator of the Technical Program Management System (TPMS) for a number of conferences. For IMS, he served on technical program committees and on separate steering committees as digest editor, transactions editor, and publications and publicity chair, a position he is again holding for IMS 2009. From 2000– 2004, he was involved with the organization of RAWCON in a number of different positions and continued to support the establishment of the Radio and Wireless Weeks since their inception, serving as general cochair of RWS in 2007. He is a Life Fellow of the IEEE and a member of the IEEE Electron Devices Society, the American Physical Society, and Sigma Xi.