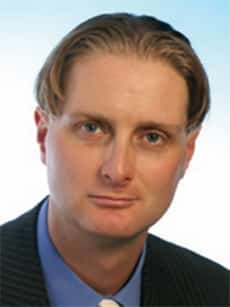 Frank Ellinger was born in Friedrichshafen, Germany, in 1972. In electrical engineering (EE), he graduated in 1996 from the University
of Ulm, Germany. He received an MBA and a PhD degree in EE from the ETH Zürich (ETHZ), Switzerland, in 2001, and the habilitation
degree in high frequency circuit design from the ETHZ in 2004. Since August 2006 he is full professor and head of the Chair
for Circuit Design and Network Theory at the Dresden University of Technology, Germany. He is member of the management
board of the Cool Silicon e.V. coordinating the German Excellence Cluster Project Cool Silicon having 65 partners from industry
and academia. From 2001-2006, he has been head of the RFIC Design Group of the Electronics Laboratory at the ETHZ, and a
project leader of the IBM/ETHZ Competence Center for Advanced Silicon Electronics hosted at IBM Research in Rüschlikon. Prof. Ellinger has been coordinator of the
EU funded projects RESOLUTION and MIMAX. He published more than 150 refereed scientifi c papers and authored the lecture book “Radio Frequency Integrated
Circuits and Technologies” published by Springer. He has been elected by the IEEE MTT-S as IEEE Distinguished Microwave Lecturer for 2009-2010.
For his works he received several awards including the ETHZ Medal, the Denzler Award, two times the Rohde&Schwarz EEEfCOM Innovation Award, and a
Young PhD Award of the ETHZ.