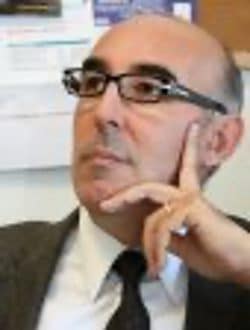 Ferran Martin received the B.S. Degree in Physics from the Universitat Autònoma de Barcelona (UAB), Spain, in 1988 and the PhD degree in 1992. He is a Full Professor of Electronics at the Electronics Engineering Department, UAB, since 2007. He is the Head of the Microwave Engineering, Metamaterials and Antennas (GEMMA) Group, Director of CIMITEC (a Research and Technology Transfer Centre, ascribed to UAB), and past Head of the Electronics Engineering Department (period 2015-2021). His research interests include microwave circuits and sensors, metamaterials, and radiofrequency identification (RFID). Ferran Martín has organized several international events related to metamaterials and related topics, including Workshops at the IEEE International Microwave Symposium (years 2005 and 2007) and European Microwave Conference (2009, 2015, 2017, and 2018), and the Fifth International Congress on Advanced Electromagnetic Materials in Microwaves and Optics (Metamaterials 2011), where he acted as Chair of the Local Organizing Committee. He has acted as Guest Editor for several Special Issues on metamaterials and sensors in different international journals, and he is Associated Editor of IEEE Transactions on Microwave Theory and Techniques, IET Microwaves Antennas and Propagation and Sensors. Ferran Martín has authored and co-authored over 650 technical conference, letter, journal papers and book chapters. Prof. Martín is co-author of the book on Metamaterials entitled Metamaterials with Negative Parameters: Theory, Design and Microwave Applications (John Wiley & Sons Inc.), author of the book Artificial Transmission Lines for RF and Microwave Applications (John Wiley & Sons Inc.), co-editor of the book Balanced Microwave Filters (Wiley/IEEE Press), co-author of the book Time-Domain Signature Barcodes for Chipless-RFID and Sensing Applications (Springer), and co-author of the book Planar Microwave Sensors (Wiley/IEEE Press). Ferran Martín has generated 22 PhDs, he has filed several patents on metamaterials and other topics related to microwave engineering, and he has headed dozens of research projects and development contracts with companies. Among his distinctions, Ferran Martín has received the 2006 Duran Farell Prize for Technological Research, he holds the Parc de Recerca UAB – Santander Technology Transfer Chair, and he has been the recipient of three ICREA ACADEMIA Awards (calls 2008, 2013 and 2018). He is Fellow of the IEEE (since 2012) and Fellow of the IET (since 2016).